For skiers, trees are shelter in the storm. For the snow that finds its way into them, they’re both filter and natural preservatives
Words by
Leslie Anthony
Photos by
Mattias Fredriksson

For skiers, trees are shelter in the storm. For the snow that finds its way into them, they’re both filter and natural preservatives, minimizing the effects of wind, sun and freeze-thaw. Here’s the thing: high-speed groomers may be fun, dropping into couloirs pretty rad and bouncing down pillow lines divine, but what I love most about skiing is being in the trees in winter. 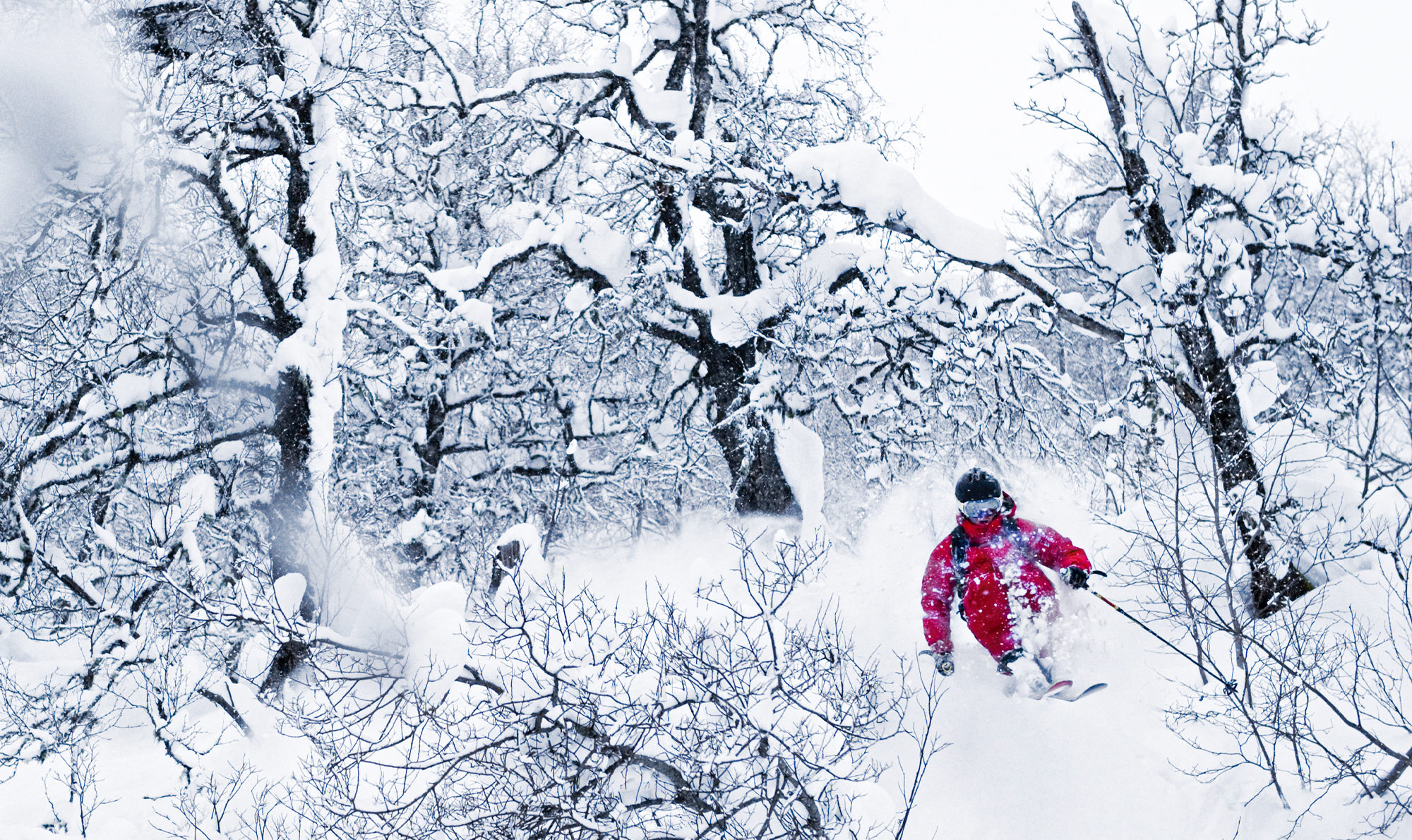 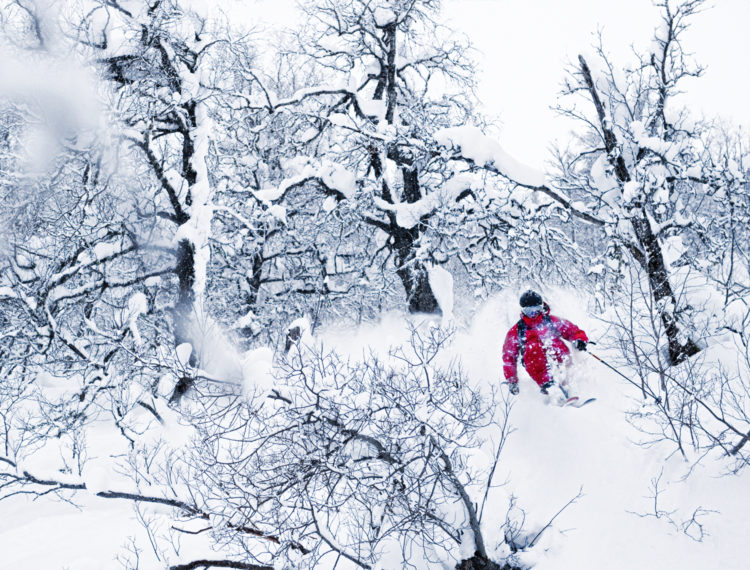 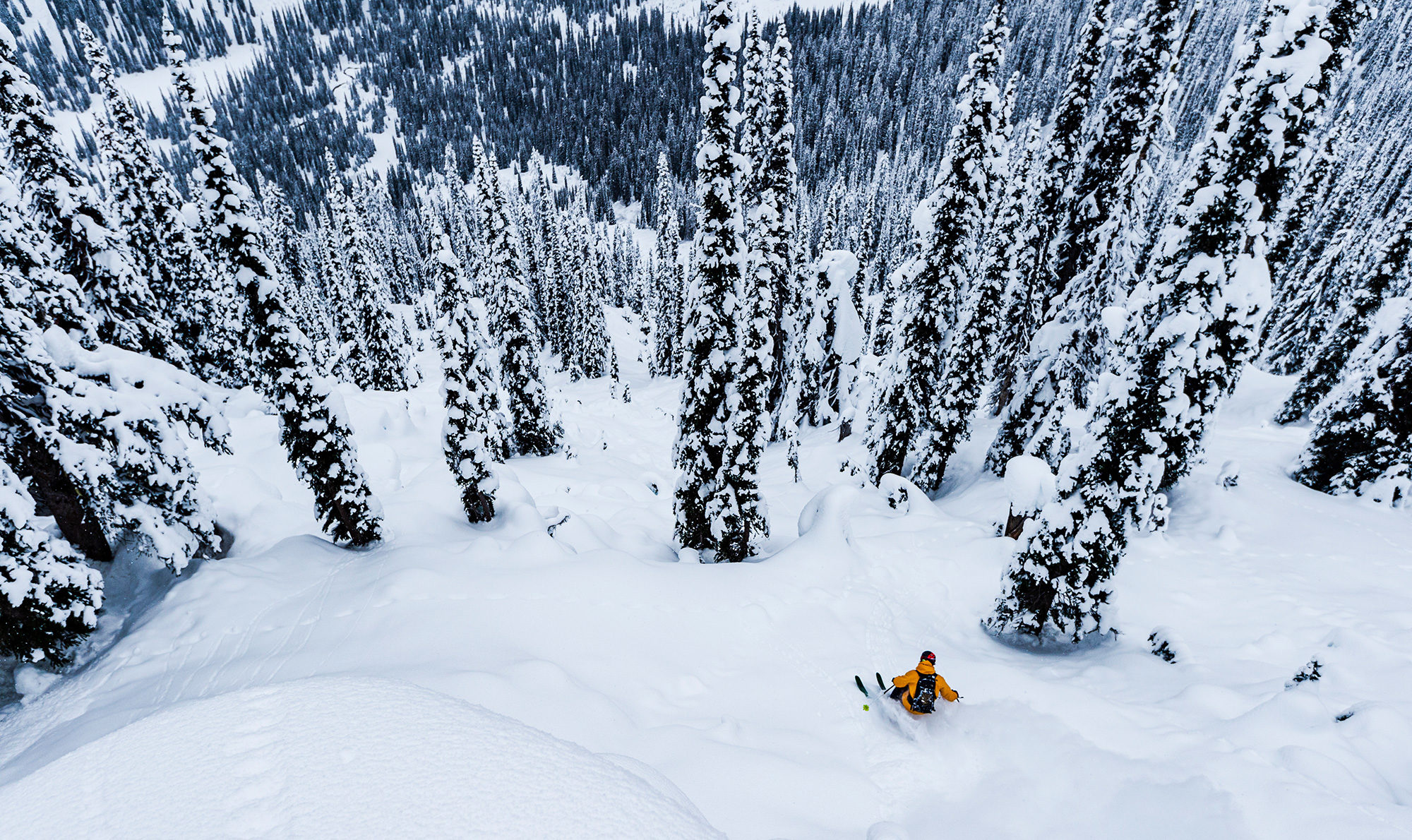 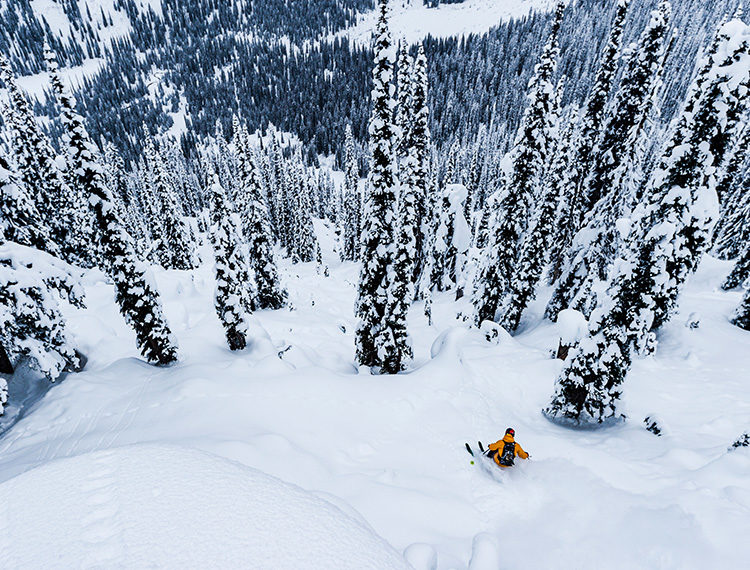 I spent a lot of time in the trees, whether on my downhill skis or cross-country boards. In addition to being a way of enjoying the simple beauty of a winter day, I was communing with the forest at what seemed its most elemental: just the trees, please—forget the cacophony and botanical pageantry of summer. I’ll admit that the hardwoods weren’t for everyone: they were more like the rough bouncers at an exclusive club, ready to repel anyone who didn’t belong—and a girded honor-guard to welcome those who did. But if you liked powder at all, it was a club worth joining—just ask the skiers at places like Sutton, Jay Peak, Mad River Glen or Stowe.

Though skiing hardwoods felt like moving through a state of suspended animation, there was plenty going on around you—stories being spun in the wood of hibernating critters and burrowing insects, of hormones coursing through roots ready to send sap racing upward at the first hint of warmth. And yet, save for an occasional creaking in the wind, all of this industry is carried out in silence. Moving among trees in winter is like entering a realm populated by beings whose sentinel nature is their very allure—as if they both conjure experience and bear witness to it. Perhaps they do. 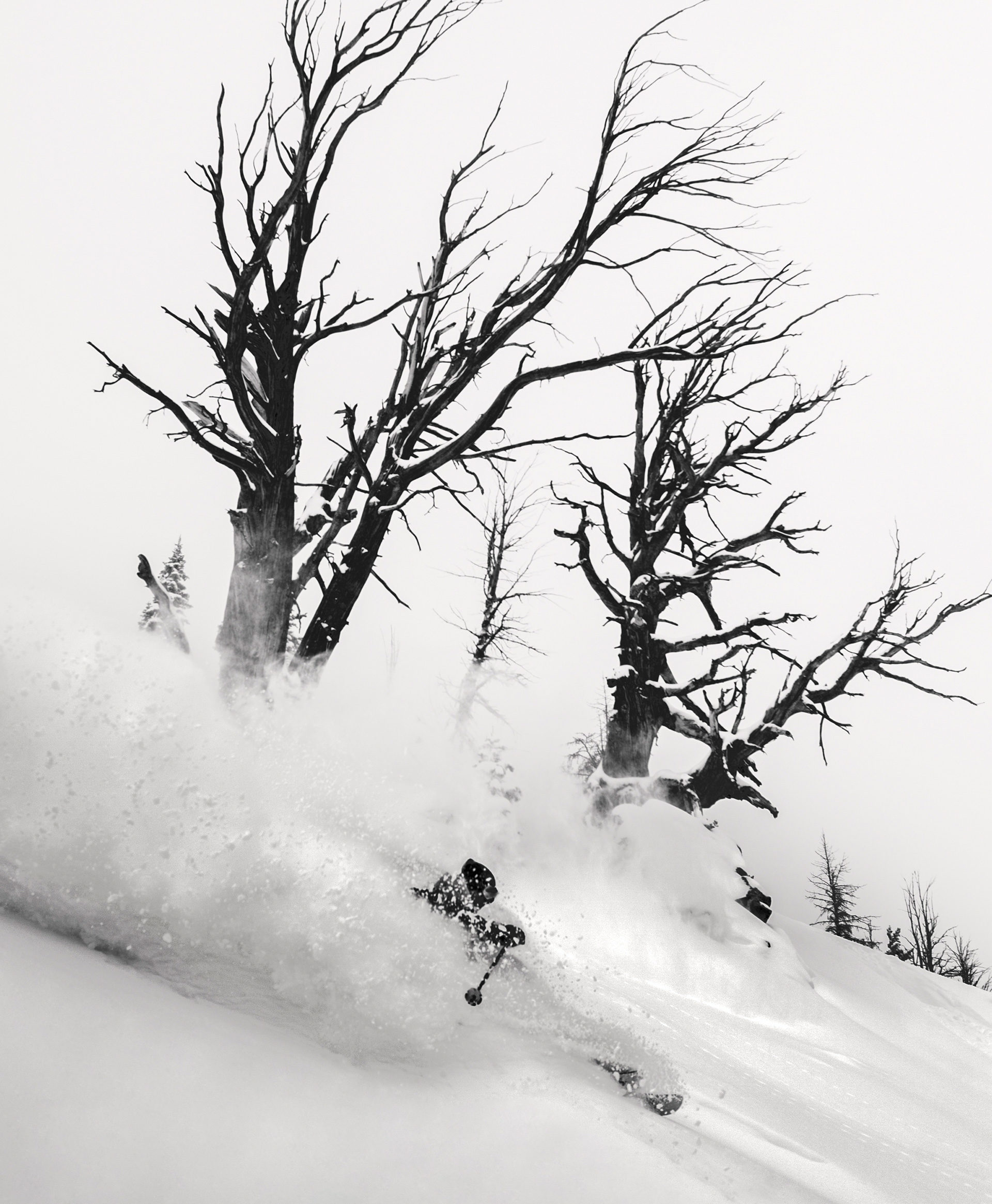 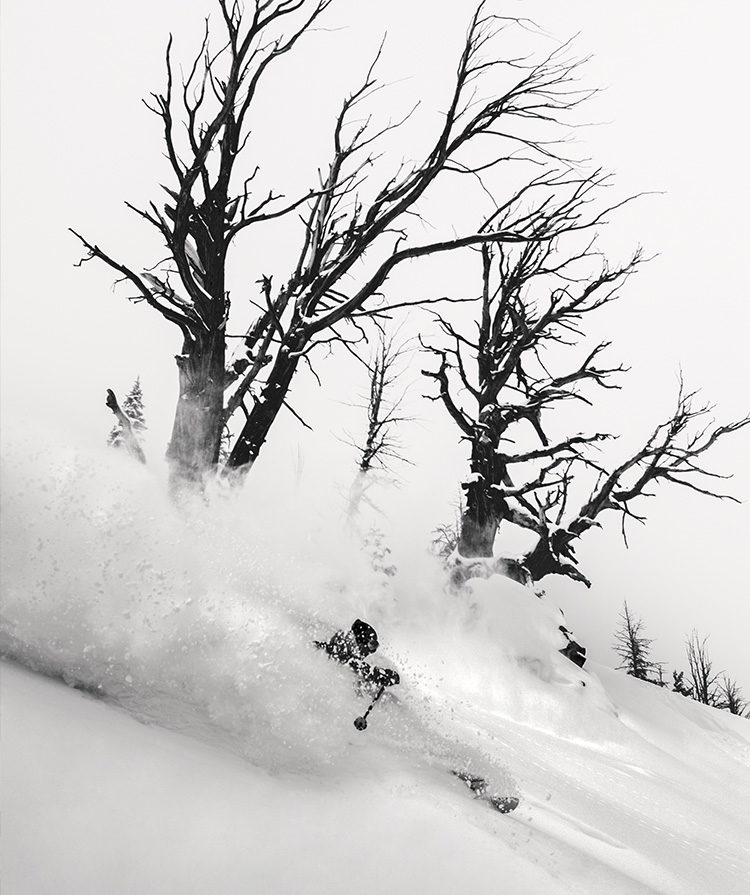 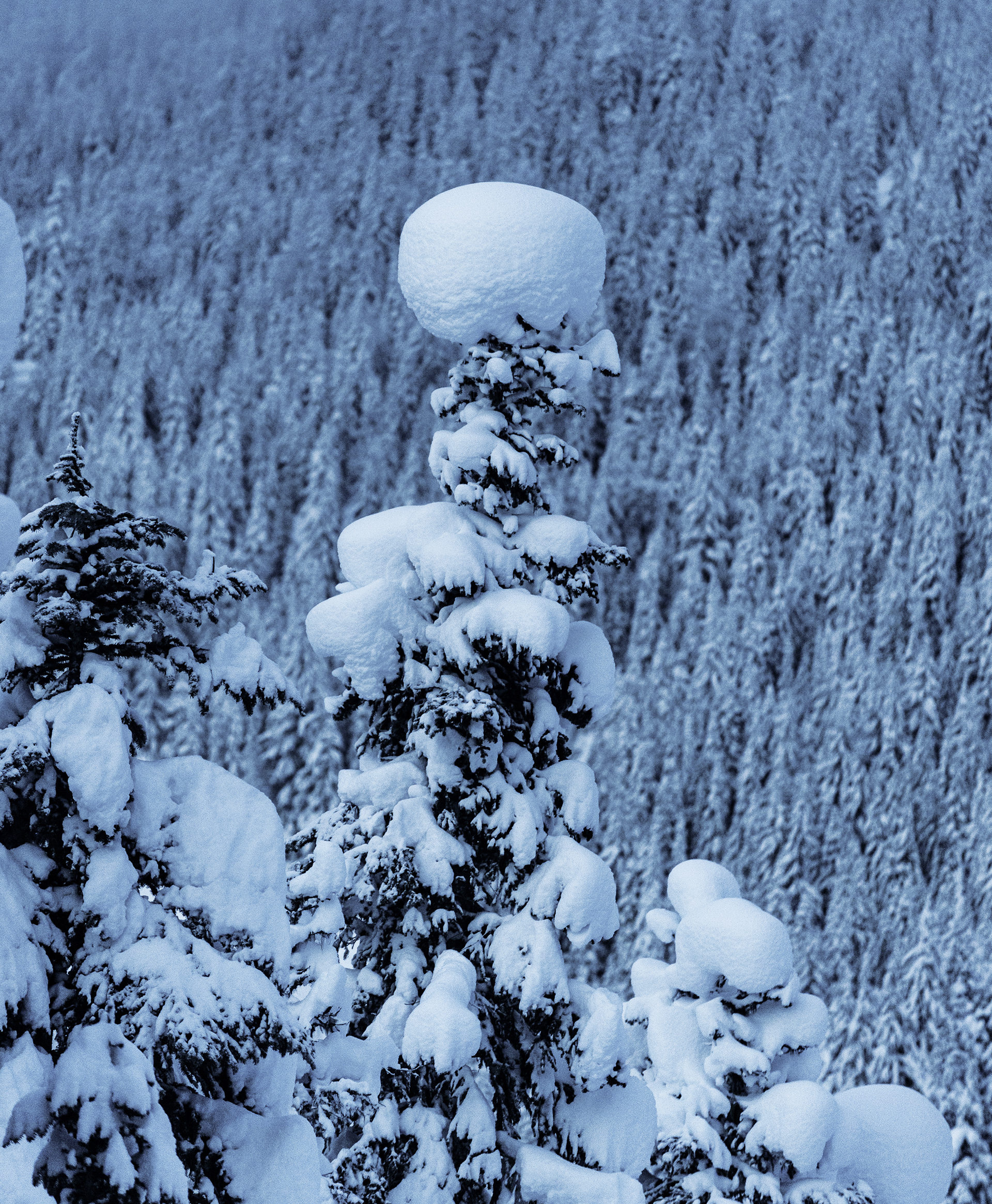 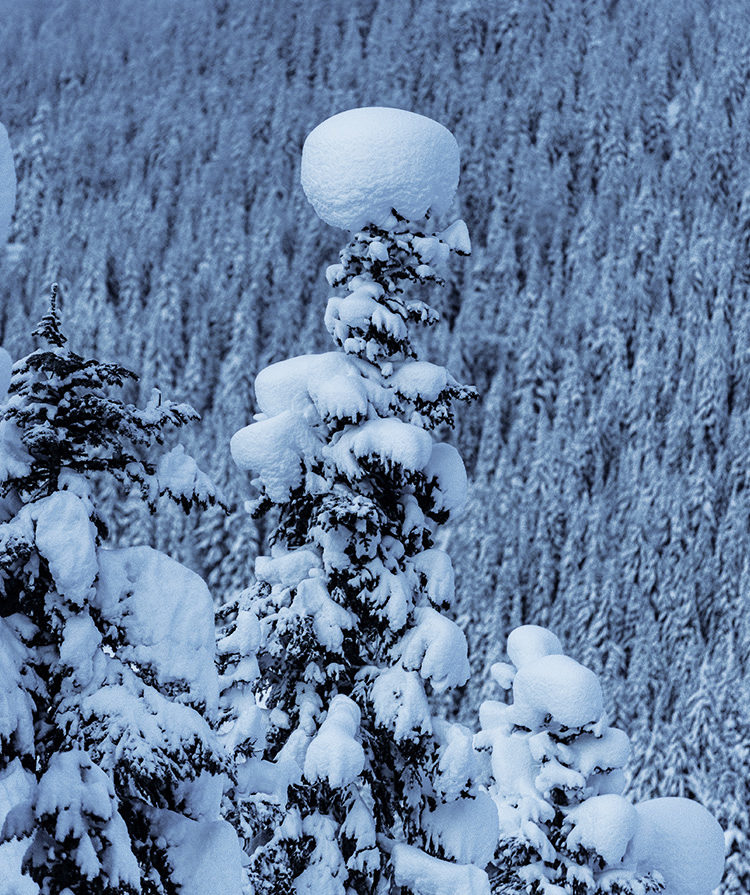 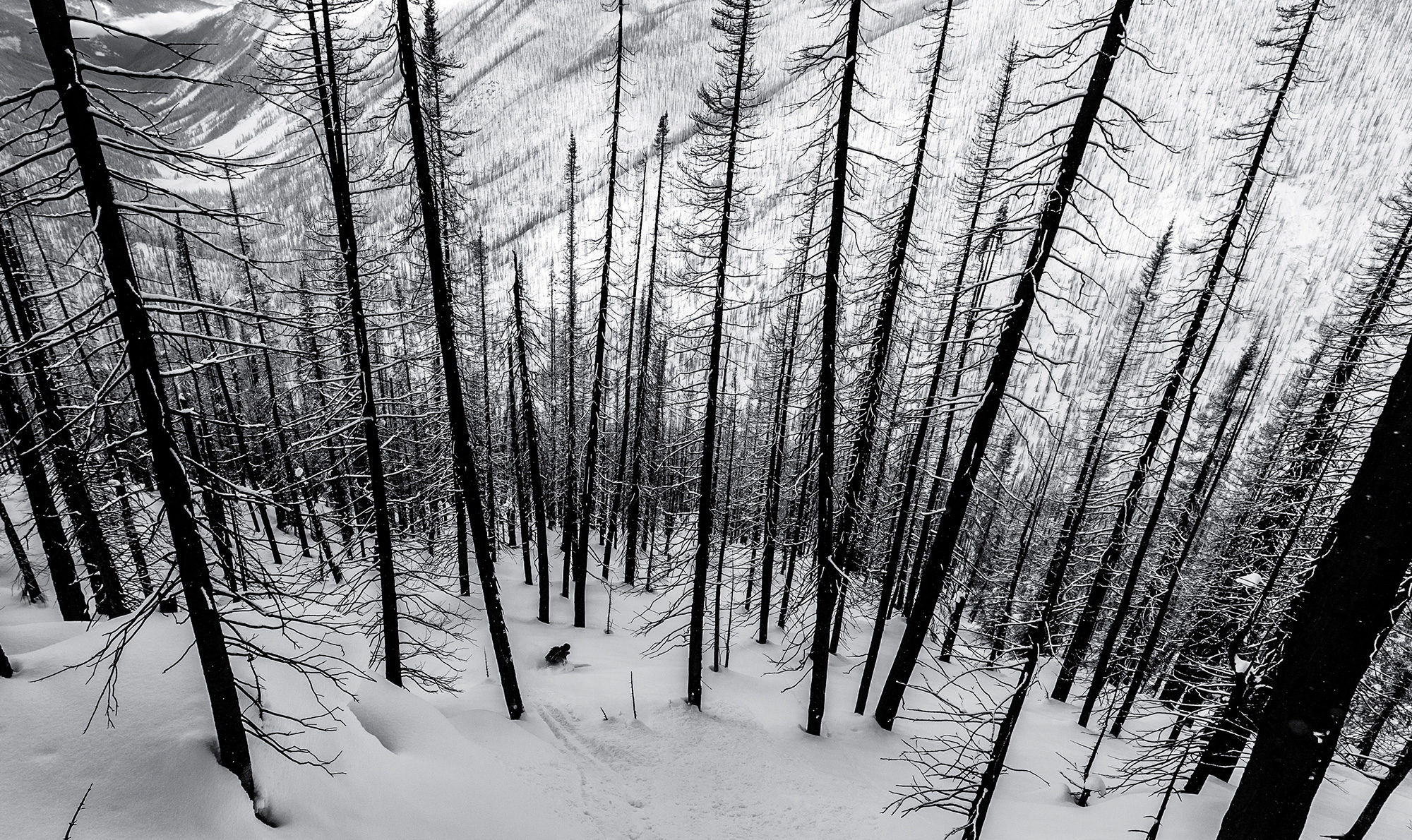 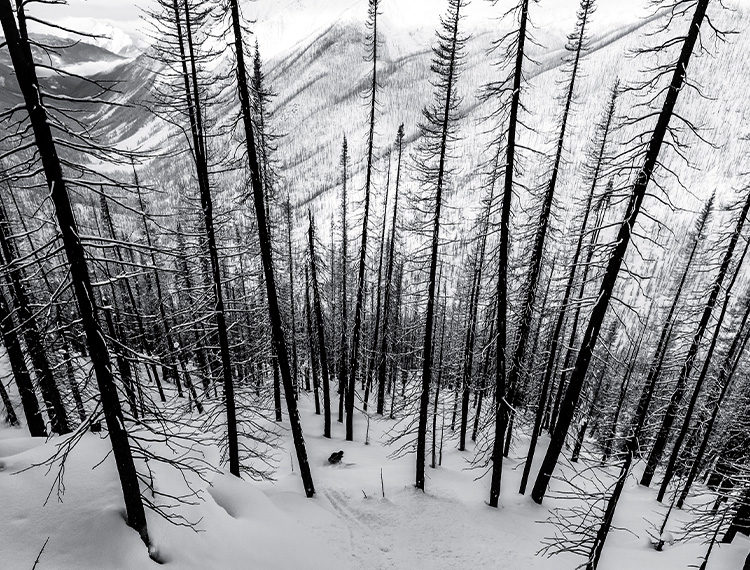 I’m fond of reminding people that the human genome contains some 20,000 genes, while a poplar tree boasts 45,000. What does it mean when the complexity of the human brain is governed by fewer genes than a block of wood? Perhaps only that when it comes to DNA, the traits of wisdom, stoicism and vigilance may be more hard-won than mobility; as it turns out, scientific research is now showing us that trees can learn and communicate through their roots via underground fungal networks—and not only with trees of their own species. Since the root-fungus connections function much like the neural networks of animals, skiing trees is like navigating through something akin to a large-scale communal brain.

In British Columbia, where I now live, not only do I still love skiing trees, but I also enjoy the myriad forms they take—from hunched snow ghosts to towering alabaster arrows of improbable symmetry. It would be easy to view such statuesque embodiments as living things that have simply checked out of daily existence for a bit, their weighted encasements of snow a measure of the force of winter. Certainly, the celebrated sauthor Lewis Carrol must have thought so when he wrote: I wonder if the snow loves the trees and fields, that it kisses them so gently? And then it covers them up snug, you know, with a white quilt; and perhaps it says “Go to sleep, darlings, till the summer comes again.

But such a view would be a mistake: the winter forest is very much alive and welcoming. 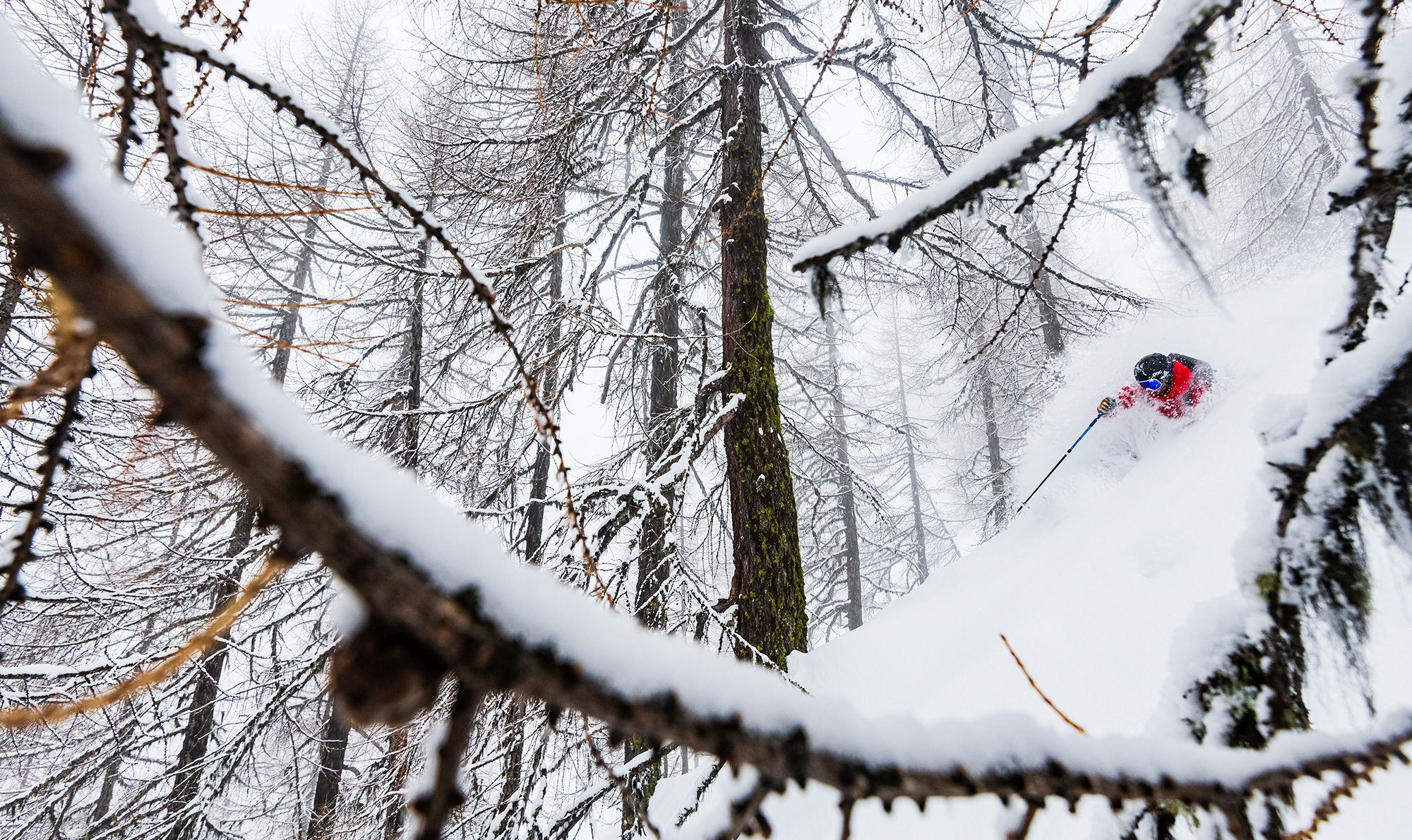 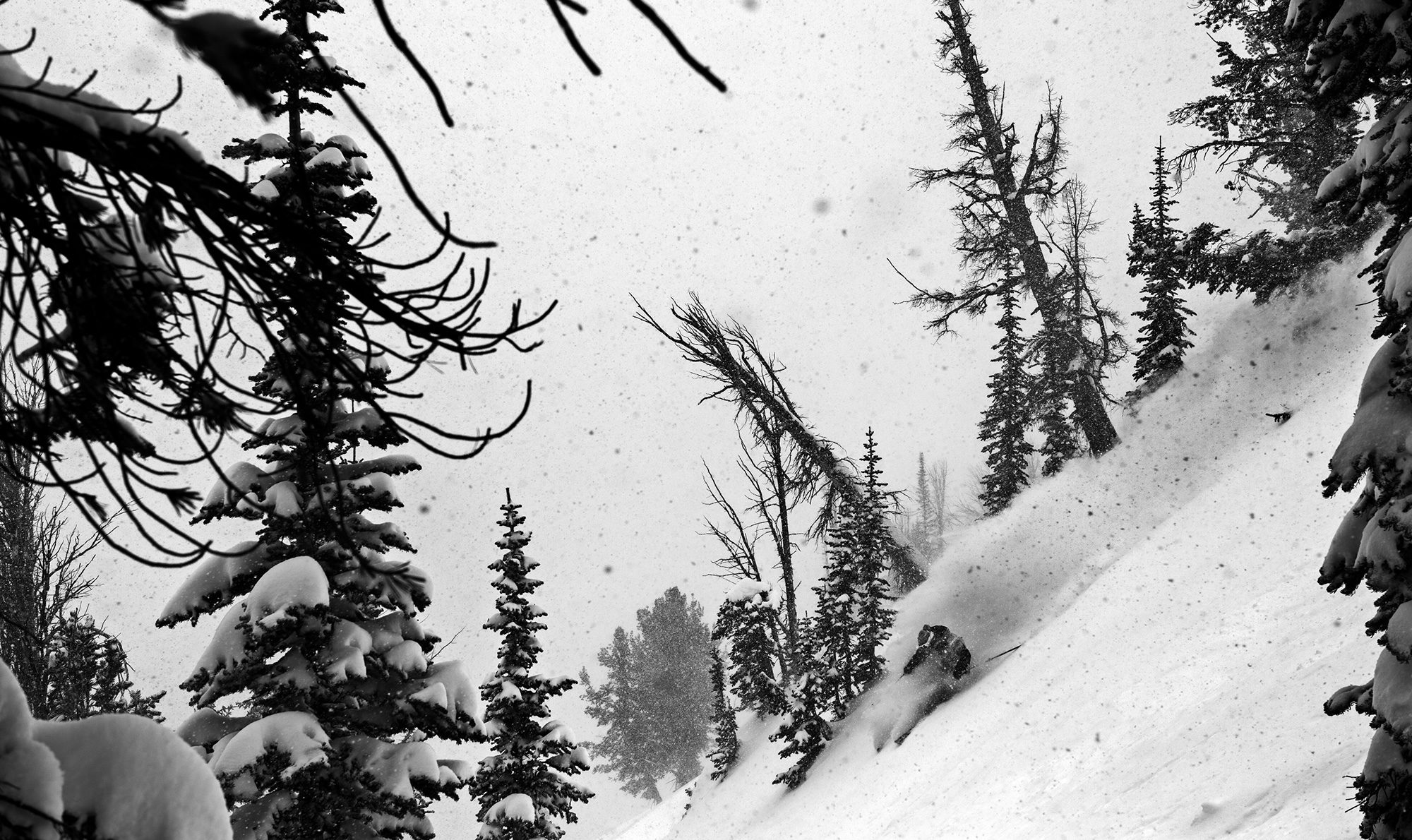 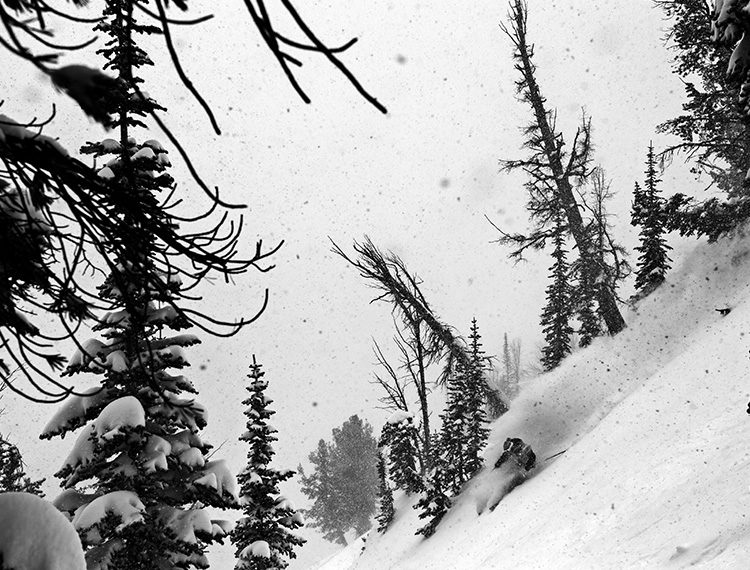 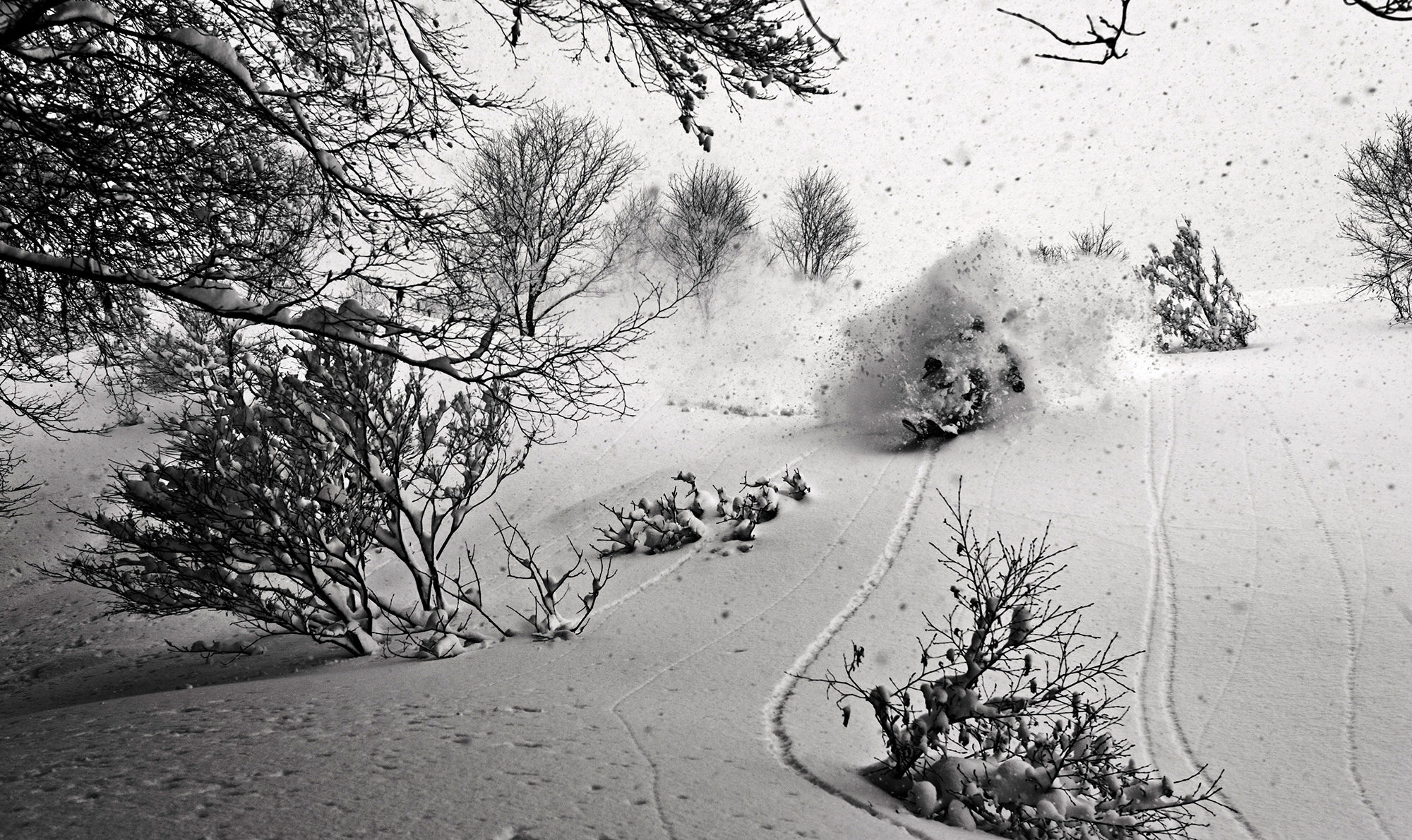 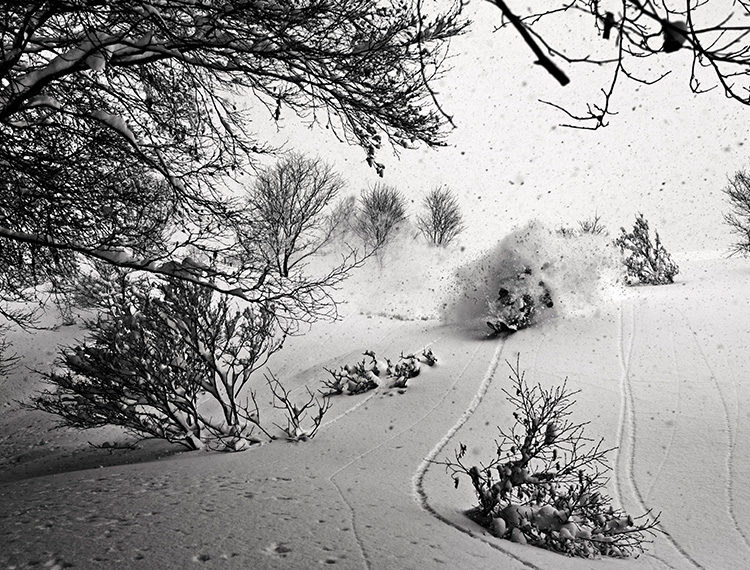 For skiers, trees are shelter in the storm; for the snow that finds its way into them, they are both fragrant filter and natural preservative, minimizing the effects of wind, sun and freeze-thaw. Microclimates also help: a mountain that spends a lot of quality time in the cloud deck, with its peak perpetually shrouded, tends to pull down significantly more snow than neighboring peaks. Where such places are found—and I’d count my home of Whistler among them—it’s the fluffy turns beneath the branches that rule the mountain’s personality.

Hitting tree line as you descend from the alpine is an interesting introduction to the forest. You start by zigzagging around a welcome mat of krumholtz and other tightly packed miniatures, but as you move downslope and larger trees prevail, things open up—though never enough to make the next move completely obvious. And this is where the “game” takes over. Even where you can see around them, tree skiing is still all decisions, discovery and endless permutation: make a turn around one, a new line comes into view and suddenly everything looks different; your next turn repeats the trick; then it happens again, much like a high-speed video game testing both your physical reflexes and mental processing powers. All the while the slope uncoils over the natural contours of the mountain, connected by lines that follow the logic of topography and water—a logic, you learn, that the trees follow as well. 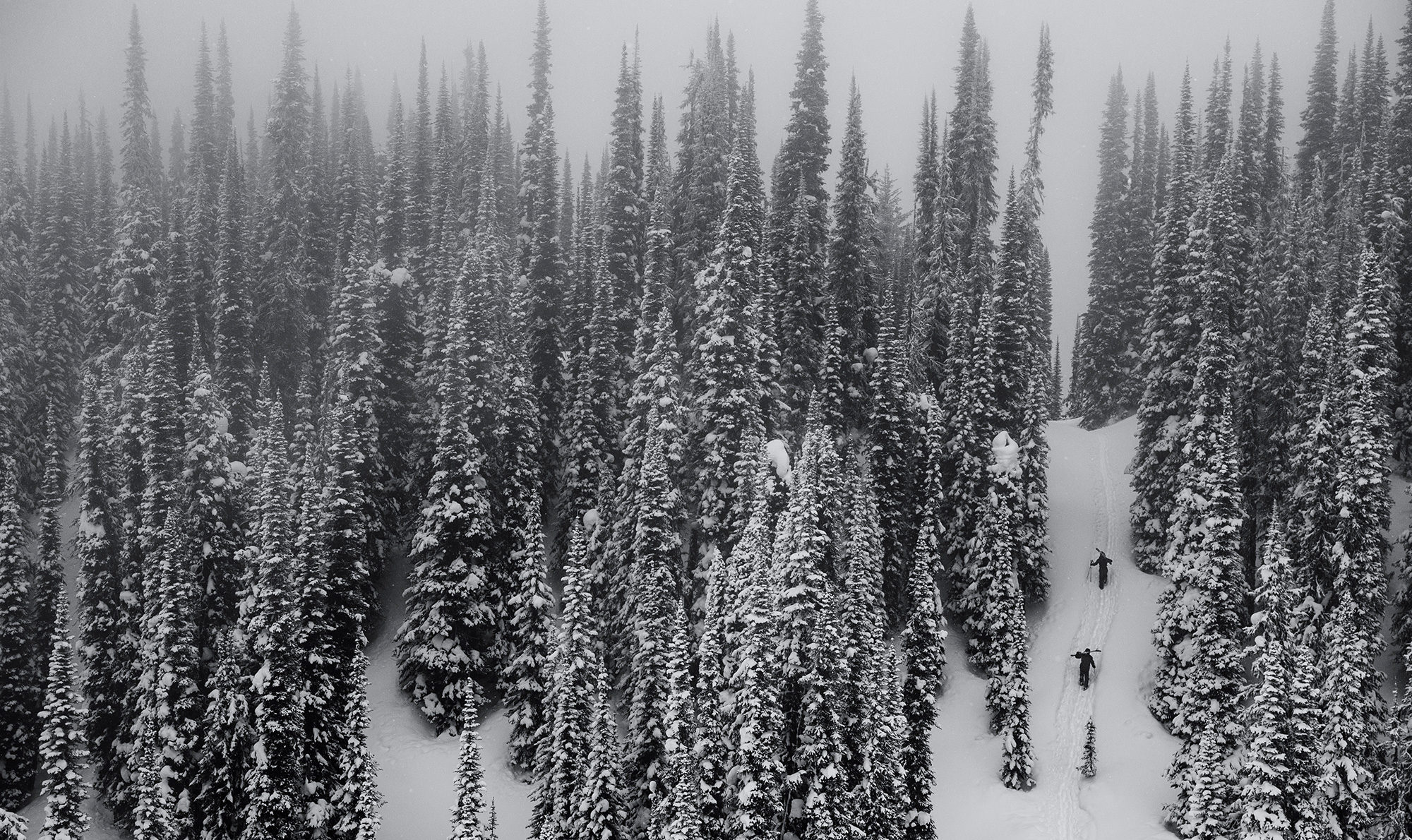 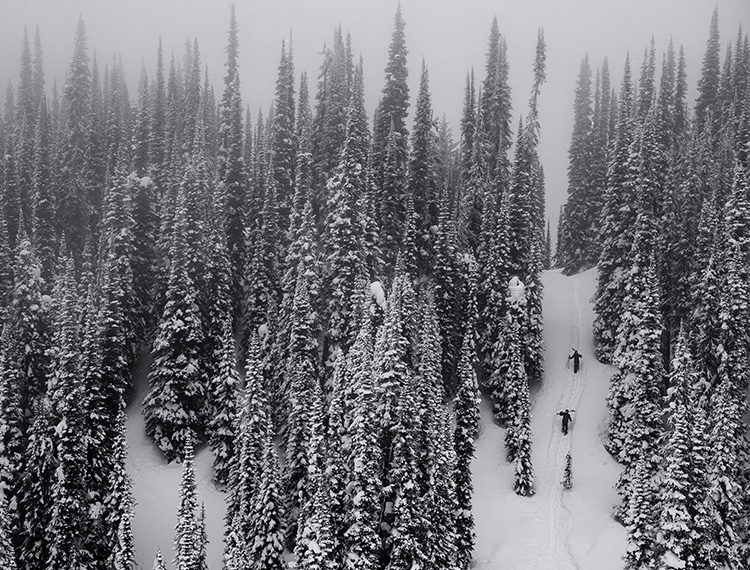 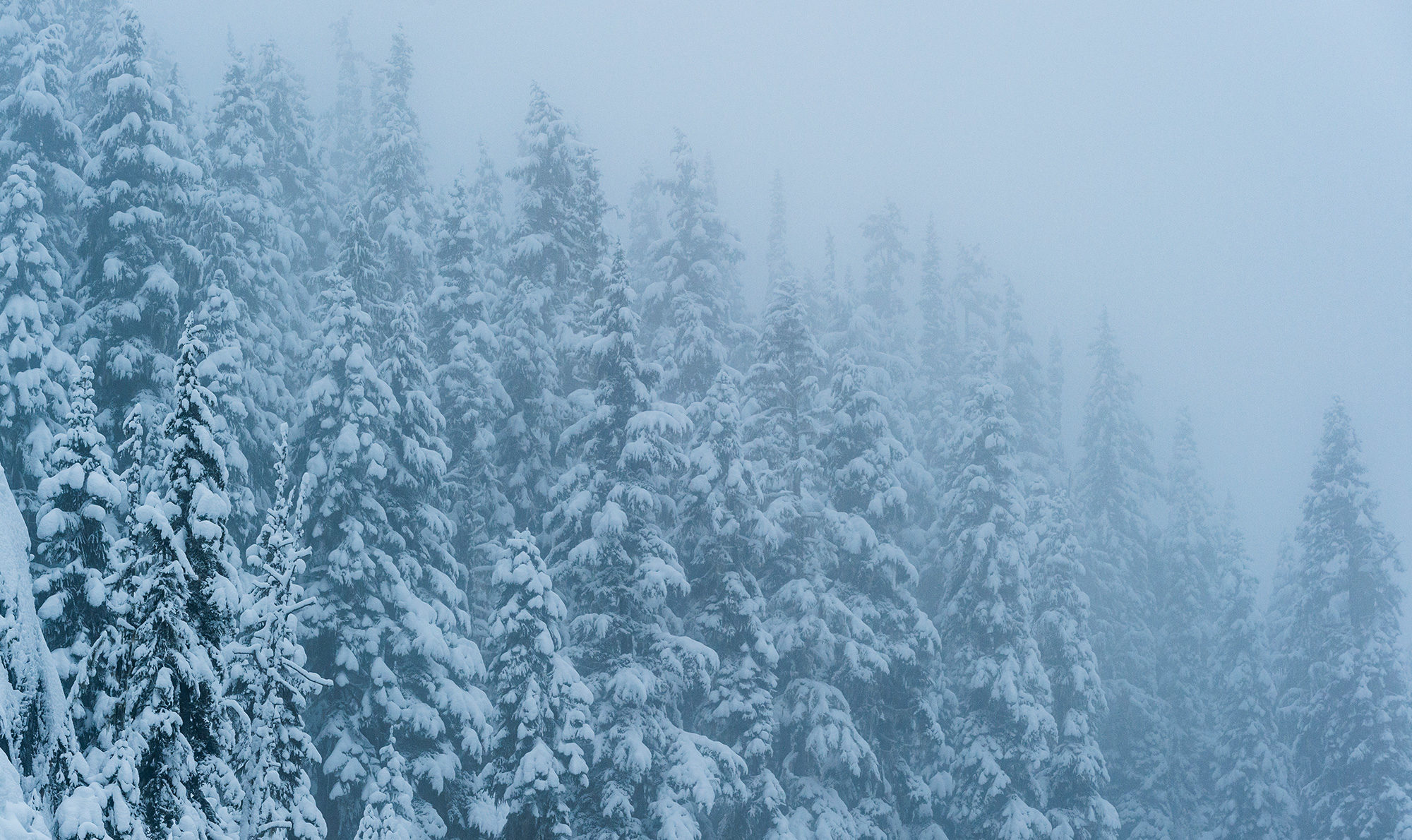 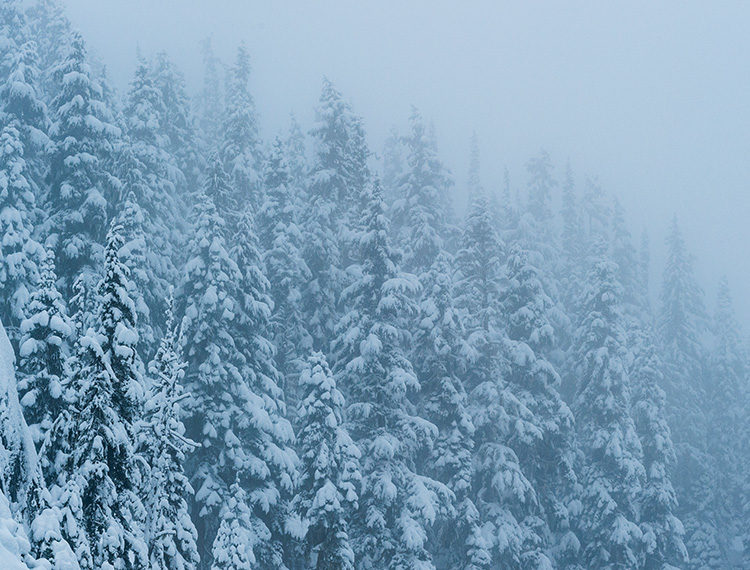 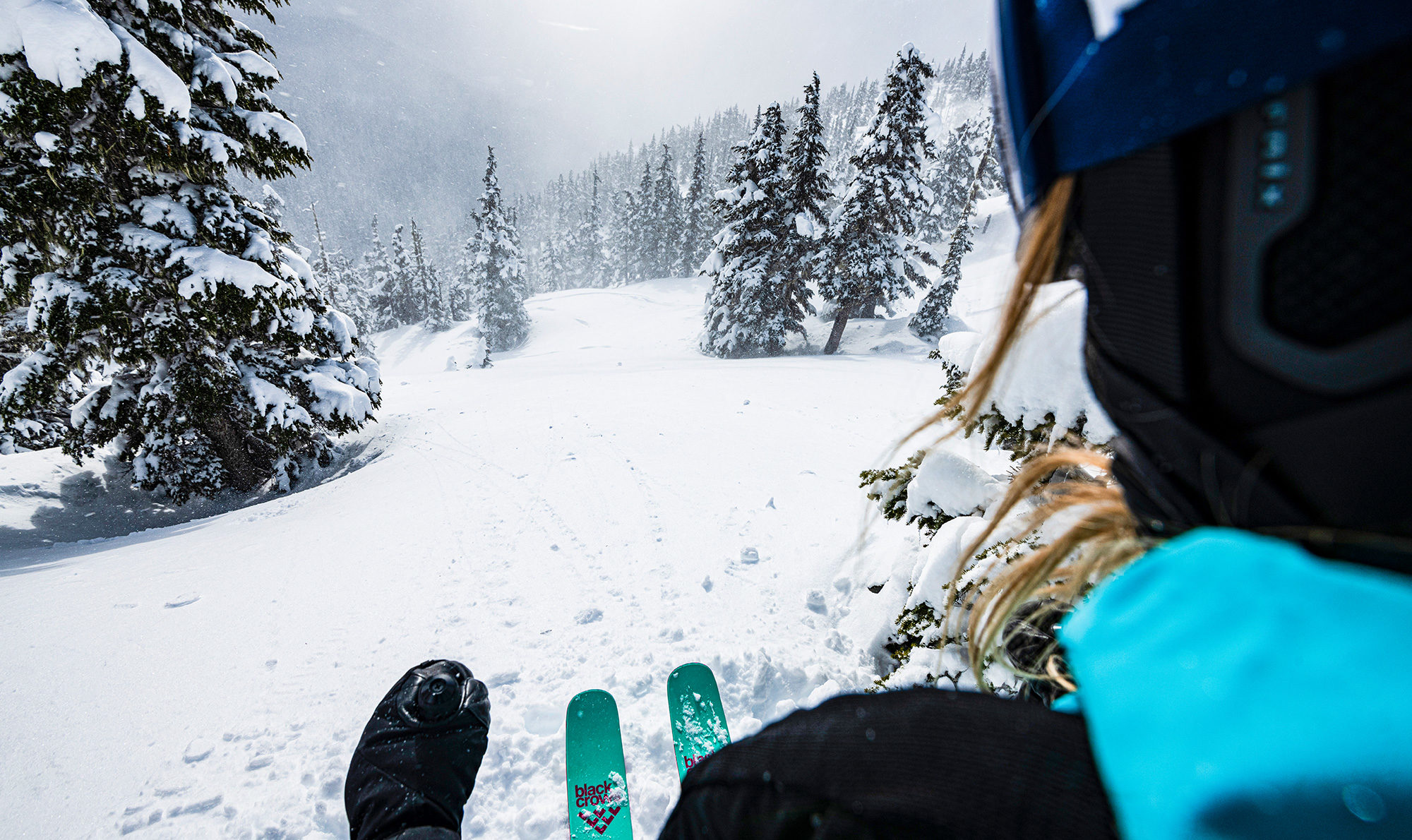 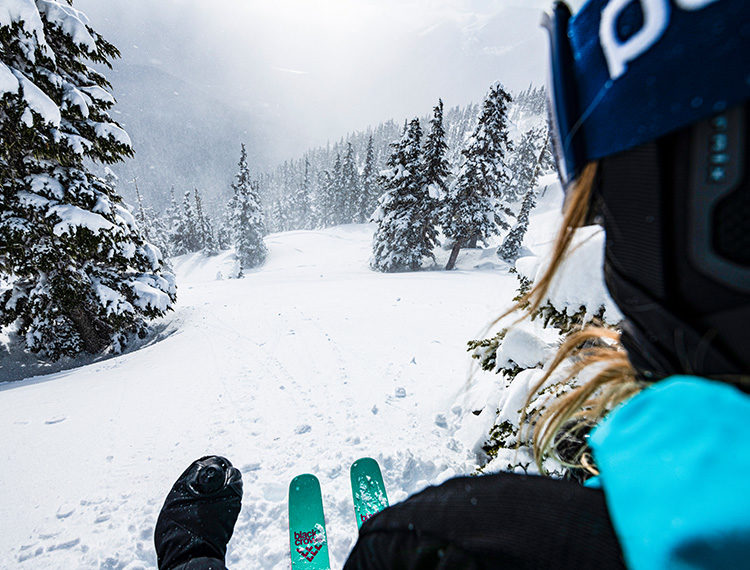 For many years I was guilty of what I’ve alluded to above: simply skiing through these snowclad trees, looking for lines and paying little attention to what I dismissed as a silent plight for spring. But a few years ago, some more reading on tree biology delivered me a different impression.

The statuesque nature of our mountain trees, it turns out, is less about our current weather than millions of years of evolution and the selective power of Ice Ages. You see, the west coast’s firs and spruce and cedar—even mighty redwoods and sequoia—are snow trees, exquisitely designed by nature in form and function to deal with and make use of the white stuff. With a heavy load, their apical symmetry sheds just enough to allow the branches to bend but not break; in cold weather they’ll hold enough snow to protect their buds; and the melting snow from branches drips in a circle, feeding roots that require a steady moisture supply over winter. Indeed, the entire story of a snow tree’s spring, summer and fall is being written as you ski by them in winter.

In a sense then, I realized, many of the trees I spend time with have evolved to “like” snow. And if that can’t make a skier love them even more, nothing can.

Trees you should know.

European larch — Oddly naked for a conifer, these trees create joyously spacious slopes with good sightlines. The tree’s native range is the Alps and the Caucasus Mountains, where it forms extensive forests at high altitudes—particularly on south-facing slopes. Many Euro ski areas feature larch skiing, but places like Courmayeur and Argentera in Italy, Grimentz and Bruson in Switzerland, and Serre Chevalier and Montgenèvre in France are sleeper-famous for it.

Japanese beech — Twisted and gnarled like some Dr. Suess invention, these are the trees you see in most off-piste ski photos from the Land of the Rising Sun. In summer, the slopes they occupy can seem like jungles with the beech rising through them. Still, winter’s deep snows cover and flatten the dense understory, leaving the trees far enough apart for legendary full-throttle skiing in places like Niseko and Kiroro on Hokkaido and Seki and Nozawa Onsens in the Japanese Alps of Honshu. The trick is to find a place that’s off-piste friendly so as not to offend Japanese sensibilities about disturbing kami—forest spirits associated with Shinto Buddhism.

Canadian conifers — The troika of mountain spruce, fir and hemlock—whether completely encased as snow ghost spires or merely topped with the massive but dodgy snow bombs that crash down on sunny days—deliver the movie-quality powder you dream of when you think of steep-and-deep British Columbia. The most legendary stands, with hundreds-of-vertical-metres descents, are found at any heli- or cat-skiing operation. Still, excellent glades exist everywhere, from Shames Mountain in the north through Revelstoke Mountain Resort in the Interior to coastal colossus Whistler Blackcomb on the south coast.

Dwarf birch — Shrink down and weed out the hardwood forests of eastern North America and you get the Scandinavian version, which, due to growing much further north and often much wilder weather, can offer a miniaturized, Tolkeinesque video-game of whack-a-skier. But when you find the right lines in places like Åre, Sweden and Sogndal, Norway, it’s definitely the real thing.

Hardwood forests — The largely deciduous stands of maple, oak, and birch of northeastern North America can be tight and unforgiving, or wide and welcoming. But if you want to ski trees in the region it’s usually what’s on the menu, and the right aspects at the right time can offer solid fun. Check out glade-friendly places like Le Massif and Sutton in Quebec, or Jay Peak, Stowe and Mad River Glen in Vermont. In low-angle forests in the spring, watch out for drip-lines strung between maple trees to catch their syrup.

Wild cards — The sun-dappled aspen stands of Colorado, Utah and New Mexico tend to flourish on flattish terrain but nevertheless provide good cruising; the giant old growth pine and fir forests in the Pirin Mountains of Bansko, Bulgaria offer spaces wide enough to drive a truck through; Krasnaya Polyana, Russia has steep and deep trees like you wouldn’t believe—albeit peppered with sinkhole caverns that can spoil your day; in the southern hemisphere, check out the infamous forests of Cerro Catedral in Bariloche, Argentina, or the broccoli-like stands of eucalyptus at any Australian resort.

Leslie Anthony is a writer and editor who knows a thing or two about snow. Longtime Creative Director of SKIER, former Managing Editor of POWDER, and author of the book White Planet: A Mad Dash Through Modern Global Ski Culture, the resident of Whistler, British Columbia, continues to appear regularly on the masthead of the world’s top ski magazines. His favorite activity? Skiing powder, of course.
@docleslie
Bark Sandwich
Pin-headed