A lifeline in a box
Words by
Leslie Anthony

People working in snow country in Europe and North America long lamented the difficulty of efficiently finding victims buried in avalanches. The only tool at their disposal was the wooden probe, which was unreliable and inefficient; by the time a buried victim was found, they were usually dead.

By the mid-20th century, the conversation had settled on the idea for a compact, personal electronic device worn by all in a backcountry party that would transmit a signal in case an individual was buried but also double as a receiver that non-buried individuals could use to search for victims—hence the portmanteau “transceiver.”

The first such device (aka “avalanche beacon”) was invented in 1968 by Dr. John Lawton at the Cornell Aeronautical Laboratory in Buffalo, New York. Legendary American snow scientist and avalanche expert Ed LaChapelle, who’d spent time at the snow research institute in Davos, Switzerland, worked with Lawton on the design. A commercial version—called a “Skadi” after the Norse god of the wilderness—hit the market in 1971. By pulsing electricity through a copper coil, it radiated a dipole-flux magnetic field, transmitting a signal at 2.275 kHz. The receiving part of the unit could pick up this signal, producing a sound through an earphone that became louder as users got closer to a victim. Still, the maximum range for the signal was not great—about 27 meters—and the directional antenna was a crude approximation of what was needed.

True enough. With new snowboarding tricks appearing almost daily, creative-minded skiers looked on with envy, certain they could do similar off-axis spins and grabs if given a chance. But there were two problems: such aerials weren’t allowed in mogul competition, skiers were banned from the nascent terrain parks, and halfpipes resorts were built for snowboarders. This made no sense to the young NCAF skiers, who started messing around on snowboard jumps and halfpipes as a sideline during summer mogul training on Whistler’s Blackcomb Glacier. They were soon innovating tricks never before seen on skis—and filming them. 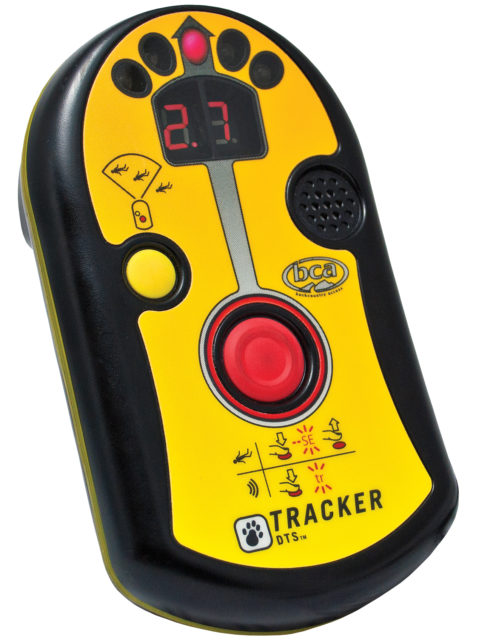 In 1986, the frequency of most transceivers increased to 457 kHz to provide a greater range (50–70 meters). Used by a range of analog transceivers (the Ortovox F1 was a favourite for the next decade), the new frequency was adopted by the International Commission for Alpine Rescue as an industry standard and eventually entrenched by the international standardization organization, the American Society for Testing and Materials, in 1996. A year later, Colorado-based cottage industry Backcountry Access (BCA) launched the first digital transceiver—the DTS Tracker—to much acclaim. Containing microprocessors that overcame some of the human error in searching, it was both more user-friendly and worked faster, offering a higher victim recovery rate. With this greater level of utility, other manufacturers soon followed suit until digital transceivers became the new technological norm.

Digital transceivers use signal strength and the dipole flux pattern to compute the distance and direction of a buried transceiver. This requires at least two antennas, although most modern versions have three. The direction of the buried transceiver is indicated as an arrow on a display, and audio tones at varying pitches or frequency guide the rescuer to single or multiple burials, each of which can be digitally flagged.

Future technological considerations with avalanche beacons include the capability of transmitting live state—i.e., whether a buried individual is still alive—and who the individual is, a further moral can of worms. With backcountry travel growing by leaps and bounds, the current Holy Grail is a smartphone app that could be used as a transceiver, which the industry would either push back on or take a lead role in licensing.

Leslie Anthony is a writer and editor who knows a thing or two about snow. Longtime Creative Director of SKIER, former Managing Editor of POWDER, and author of the book White Planet: A Mad Dash Through Modern Global Ski Culture, the resident of Whistler, British Columbia, continues to appear regularly on the masthead of the world’s top ski magazines. His favorite activity? Skiing powder, of course.
@docleslie