In a country where most ski offerings qualify as small and unique, Stranda Skisenter is a small but unique standout, with outstanding skiing and views to remember. Lodged in the crags of the Sunnmøre Alps, Stranda is a paradise of high-speed lifts, perfect pistes, a surfeit of wide-open terrain, plenty of snow, impressive slackcountry… and very few humans. Basically, a powderhound’s dream-come-true.

Oscar Almgren well knows this skier’s dream. The Swedish guide not only made Stranda his home but singlehandedly parlayed the area’s attributes into a global destination for ski touring. Growth has been explosive for his company Uteguiden, and Almgren employs a dozen or more guides during the busy spring touring season. This makes him the biggest client of the town’s only hotel, ditto restaurants, and even the Skisenter relies on him to drive clientele. It’s the story of a young, energetic transplant transforming a previously somnolent, tradition-bound backwater into an international ski destination. 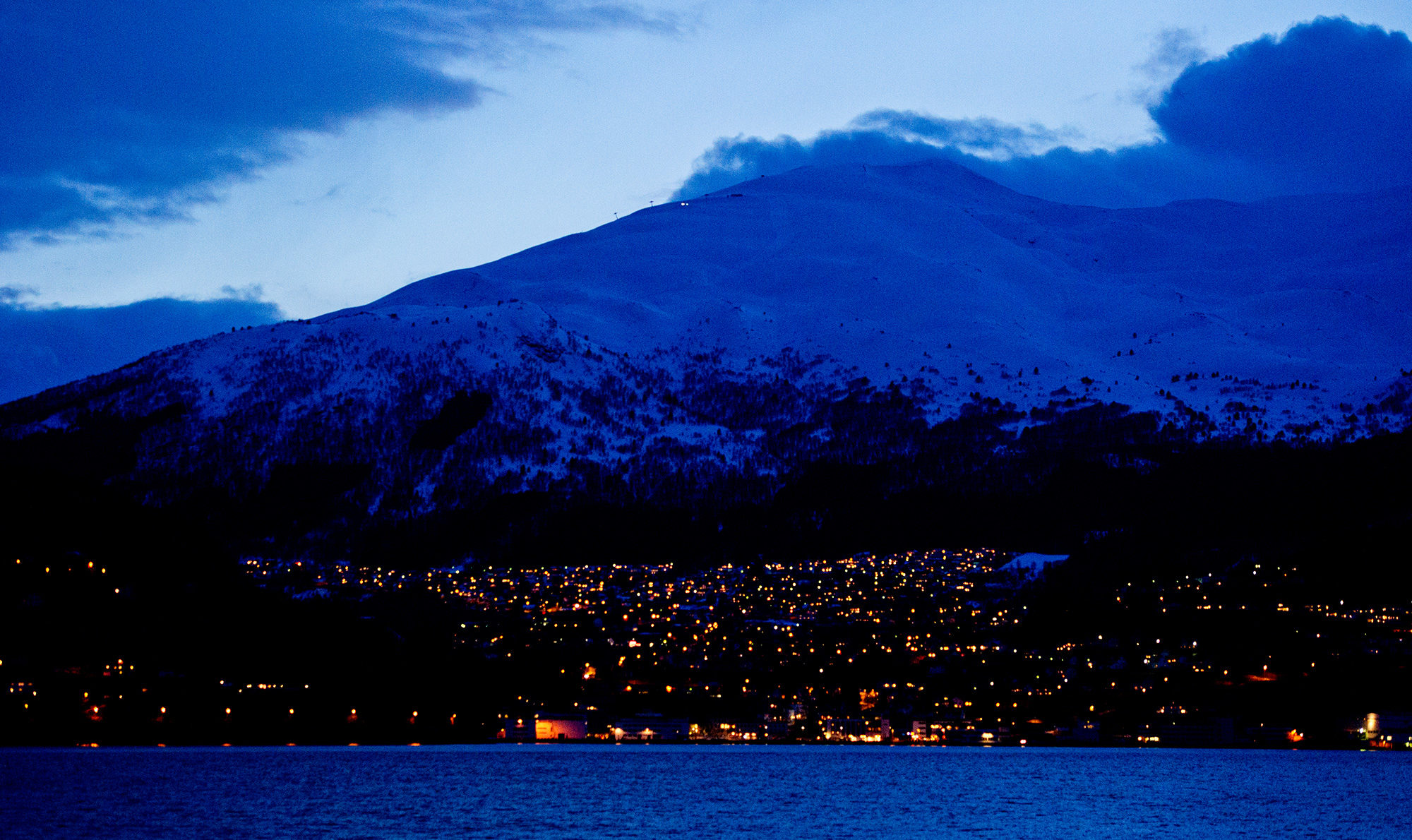 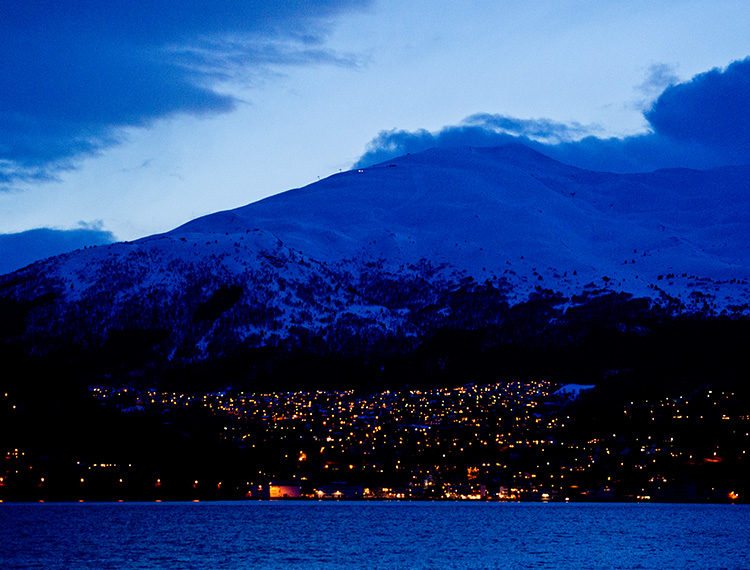 Stranda Skisenter is literally located straight above the little village by Storfjord in the Sunnmøre Alps.

Stranda Skisenter is literally located straight above the little village by Storfjord in the Sunnmøre Alps. 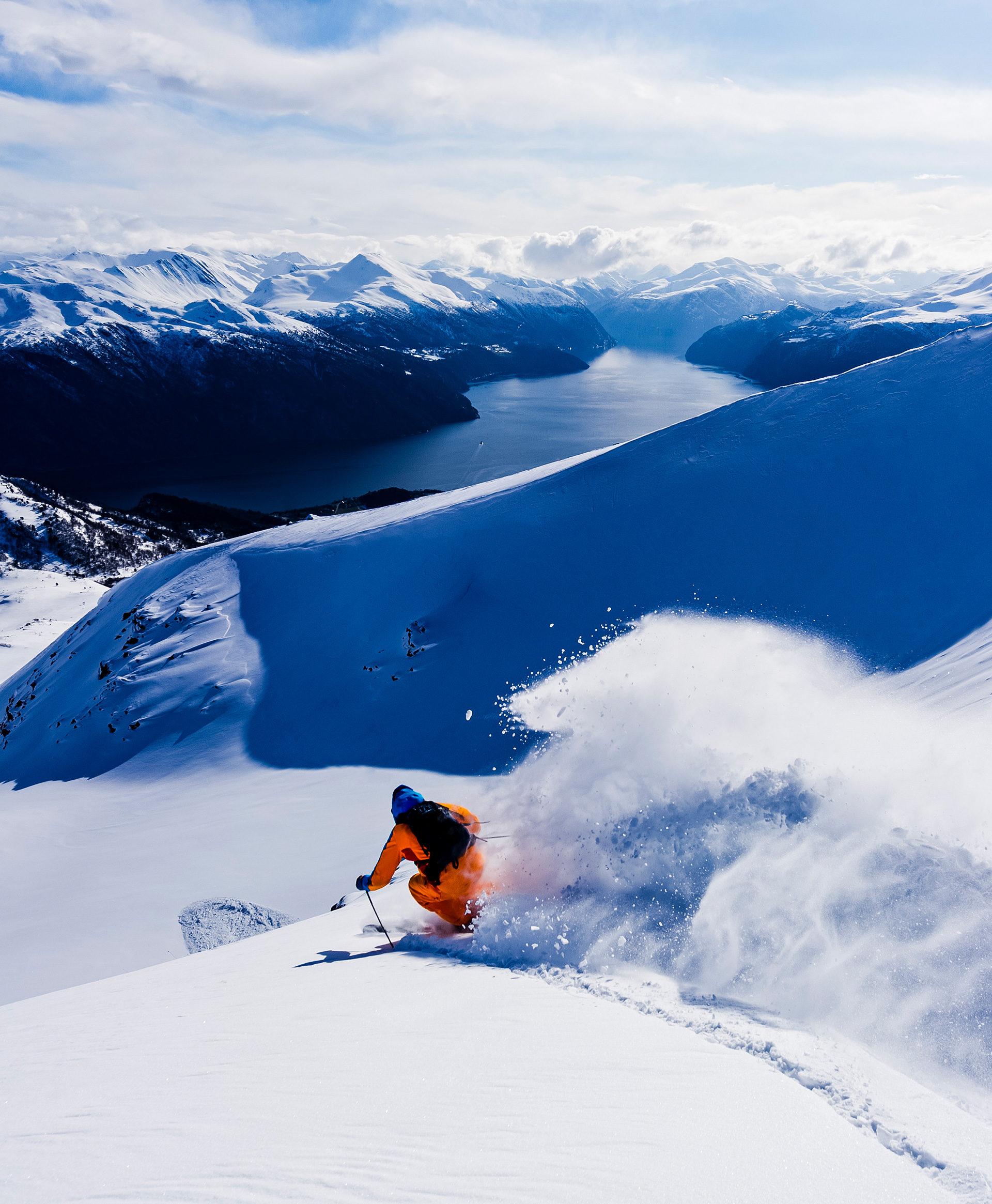 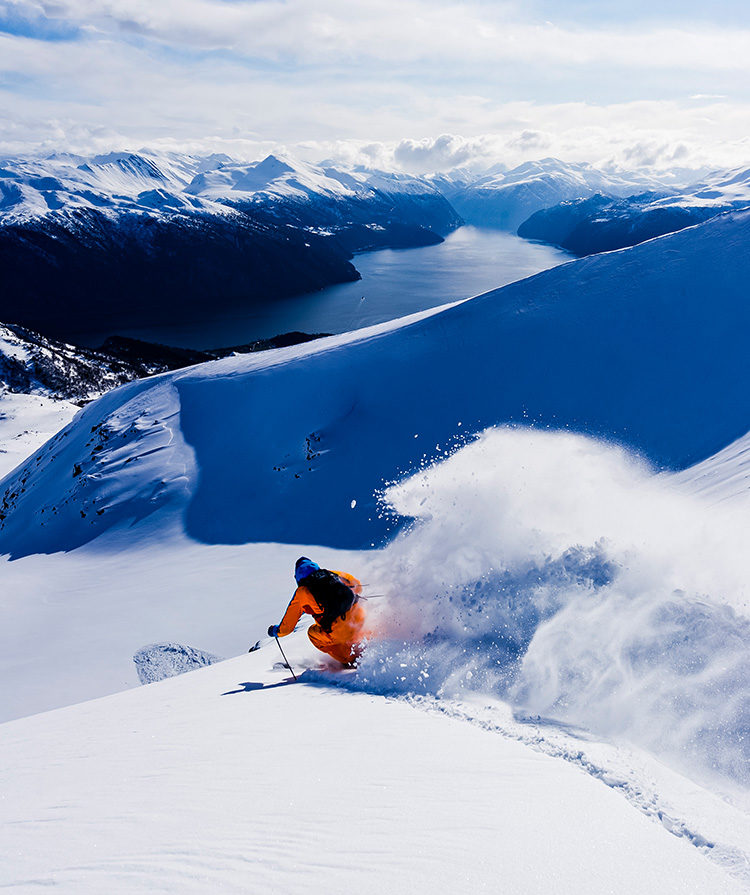 Powder skiing in mid-April is not uncommon in Stranda. Janne Tjärnström finds the goods in the Roaldshorn side country.

Powder skiing in mid-April is not uncommon in Stranda. Janne Tjärnström finds the goods in the Roaldshorn side country. 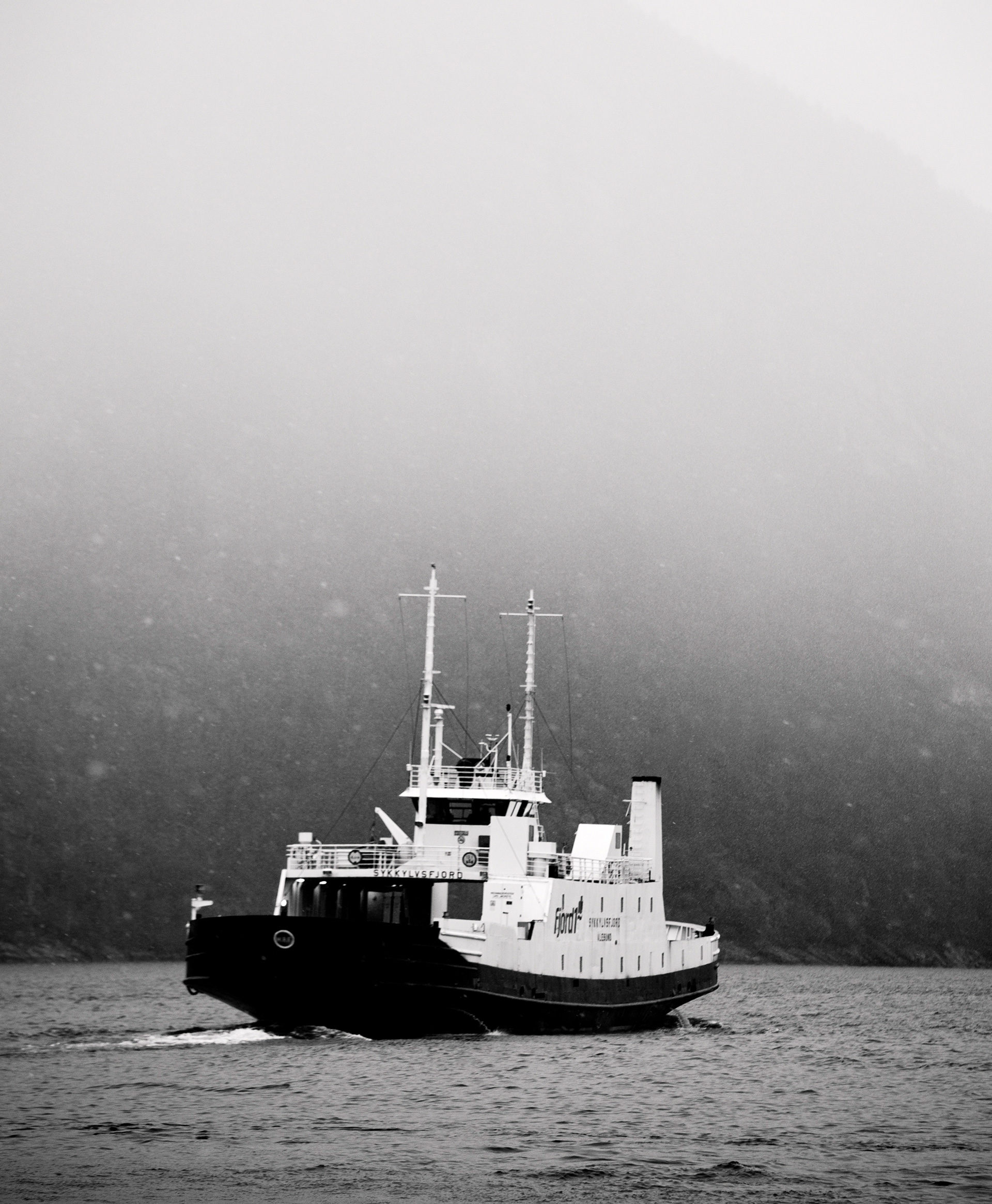 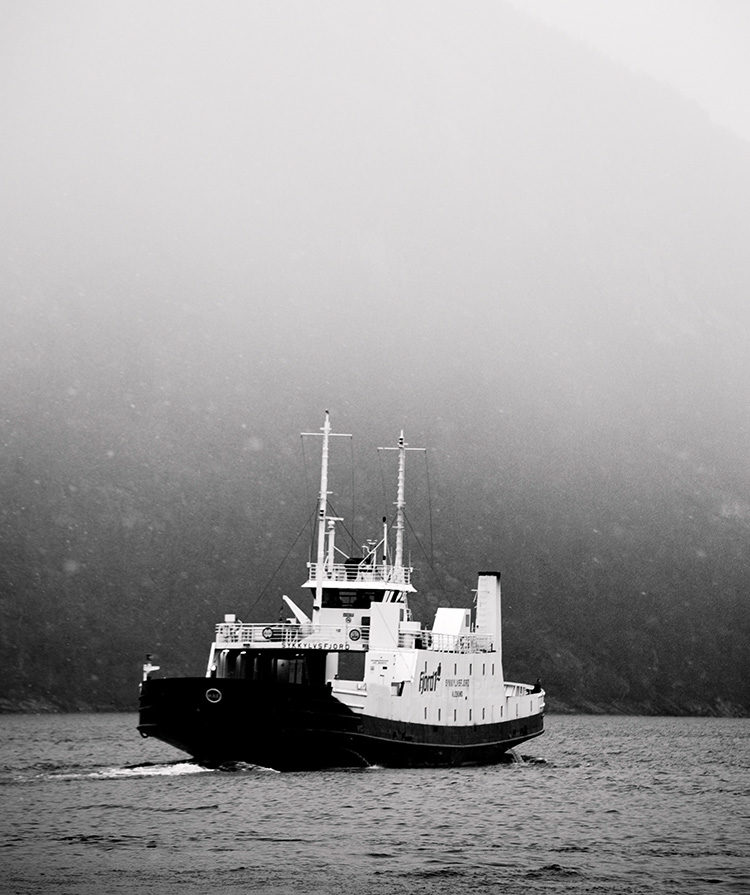 Moody weather, a ferry on the fjord, and Röyksopp in the headphones – it doesn’t get much more Norwegian than this.

Moody weather, a ferry on the fjord, and Röyksopp in the headphones – it doesn’t get much more Norwegian than this.

Visiting with a small group, Oscar meets us at the base our first morning, and we ride the strangely empty gondola skyward. Debarking, we traverse a significant slope to scout the adjacent valley. Peeking into a massive bowl accessible from the summit and only a short walk above the T-bar, Oscar leads us down an open ridge away from the ski area. Here, each year, an Inferno-style downhill takes place on a 1,100-vertical-metre/3609 feet course; groomed through treeline, the route spits racers out into a meadow and then runs down into Stranda proper on snow-covered streets, ending almost at sea. Though top racers bomb the course in under five minutes, our descent of half the distance takes 30, first on open slopes, then through subalpine krumholtz, into the regular forest, then onto a roadway through a wooded area, where we eventually speed out onto exposed grass. The drab house 20 metres from where we stand, Oscar notes, is where he once lived as a ski bum before the ski hill modernized. And it’s here that he explains the story of why such a stellar area is virtually empty.

Stranda’s 4,500 citizens are an anomaly in having the country’s lowest unemployment rate (frozen pizza is a Norwegian national obsession and Stranda factories pump it out) while being saddled with its highest per-capita debt—accrued when politicians overextended the community-owned ski area with a €20 million lift-upgrade project that left it far overcapacity for the town’s meagre accommodation (only 300-beds) and unable to cover costs. Even on a Saturday, the shiny gondola base glints into a lineup-free vacuum. In addition, a glut of private cabins built by fishing and oil tycoons with no occupancy stipulations (sound familiar, ski country?) are used but a few weeks a year. When the ski hill passed from the town’s hands to private interests, at an enormous loss, it had no marketing director to work on increasing visitation. Complicating matters, Stranda is also challenging to reach. The remote location, surrounded by fjords, high passes, and narrow roads, makes it far from anywhere. But if you’re willing to fly into Ålesund or drive from Trondheim or Bergen (at least 5 hours from either), you’re in for a treat. 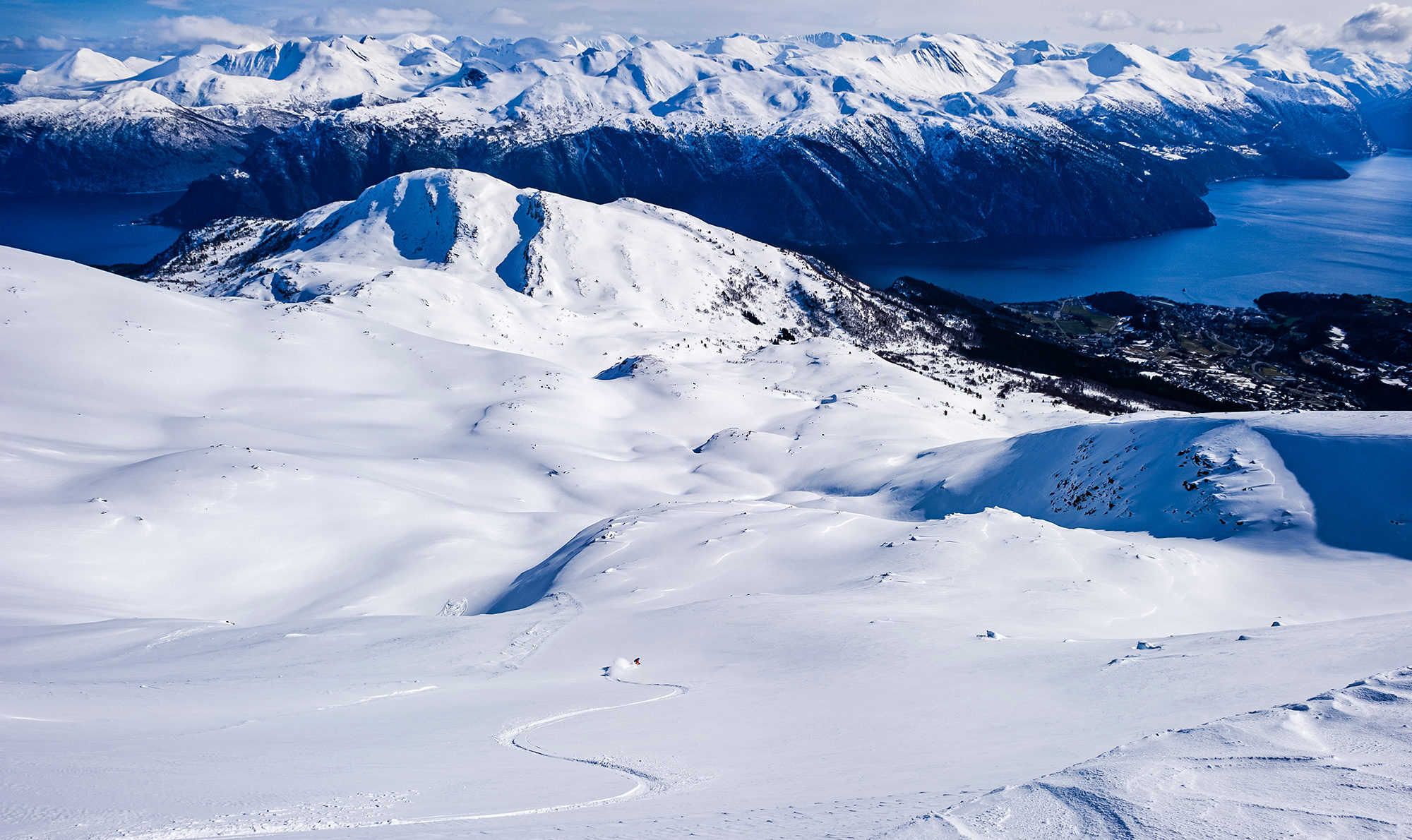 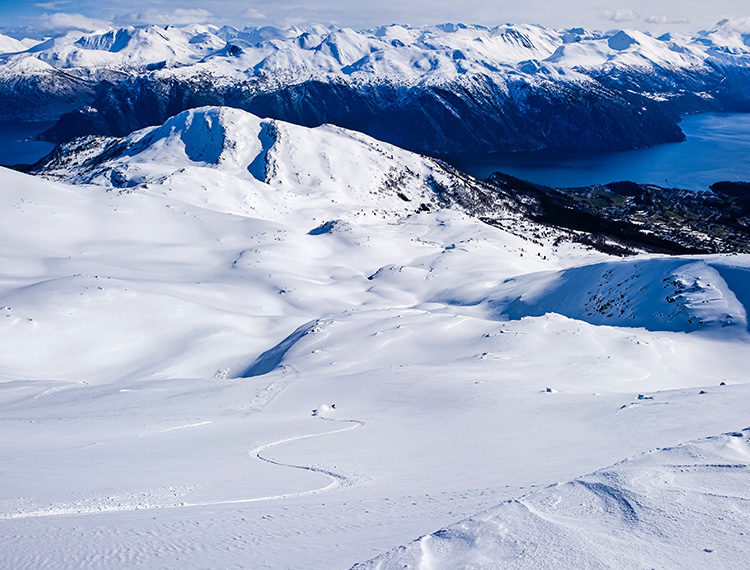 Stranda is a powder hound’s dream-come-true. Janne Tjärnström boot packed less than 20 minutes from the top of the Roaldshorn to score this epic run.

Stranda is a powder hound’s dream-come-true. Janne Tjärnström boot packed less than 20 minutes from the top of the Roaldshorn to score this epic run.

Later in the trip, Oscar climbs us above the gondola before sunrise to the top of the 1,230-metre/4035 feet Roaldhorn after a wet storm, confident of lingering powder. Unlike many Scandinavian ski areas plagued by flat-top mountains, the serrated Sunnmøre Alps are high enough to block and hold alpine weather. It can rain a whole day in town with good skiing only 25 minutes up-valley; most of the Skisenter can seem miserable, while the upper parts above the gondola are in great shape. The view from the summit channels every scenic alpine cliché: the rugged, glacier-crowned mountains clearly deserving of their evocative moniker, and the deep-blue of Storfjord reminding us that we can ski to the ocean from here. And, amazingly, all around us lies the very powder Oscar intuited. As sunrise washes over Roaldhorn, we lay wide, high-speed turns through perfect snow towards the fjord without a single person in sight, digging into this dream-come-true like it’s an après-ski pizza.

Leslie Anthony is a writer and editor who knows a thing or two about snow. Longtime Creative Director of SKIER, former Managing Editor of POWDER, and author of the book White Planet: A Mad Dash Through Modern Global Ski Culture, the resident of Whistler, British Columbia, continues to appear regularly on the masthead of the world’s top ski magazines. His favorite activity? Skiing powder, of course.
@docleslie