In the Field
6 min

When Norway’s prince Haakon Magnus visited Narvik in northern Norway last spring, it was no coincidence that local skier Micke af Ekenstam showed him around the mountains. Ekenstam often skis with visiting journalists and film crews, and after almost 25 years in Narvik, few know the local alpine better than him.

The prince came to Narvik in support of the town’s application to host the 2027 alpine skiing World Championships. Ekenstam is spearheading the proposal as the sustainability coordinator, so he was an obvious choice when the Norwegian Royal House requested an appropriate ski guide for Magnus.

On a glorious spring day, Ekenstam took the Norwegian prince on numerous powder runs high above the Arctic mountain town. Fitting of his nobility, Haakon telemarked with style and grace.

“The prince is a great skier and showed great mountain skills. He followed me on Narviksfjellet with ease, [and] we also had fascinating conversations about mountains, sustainability, and the possibility of getting the World Championships in alpine skiing to Narvik.” 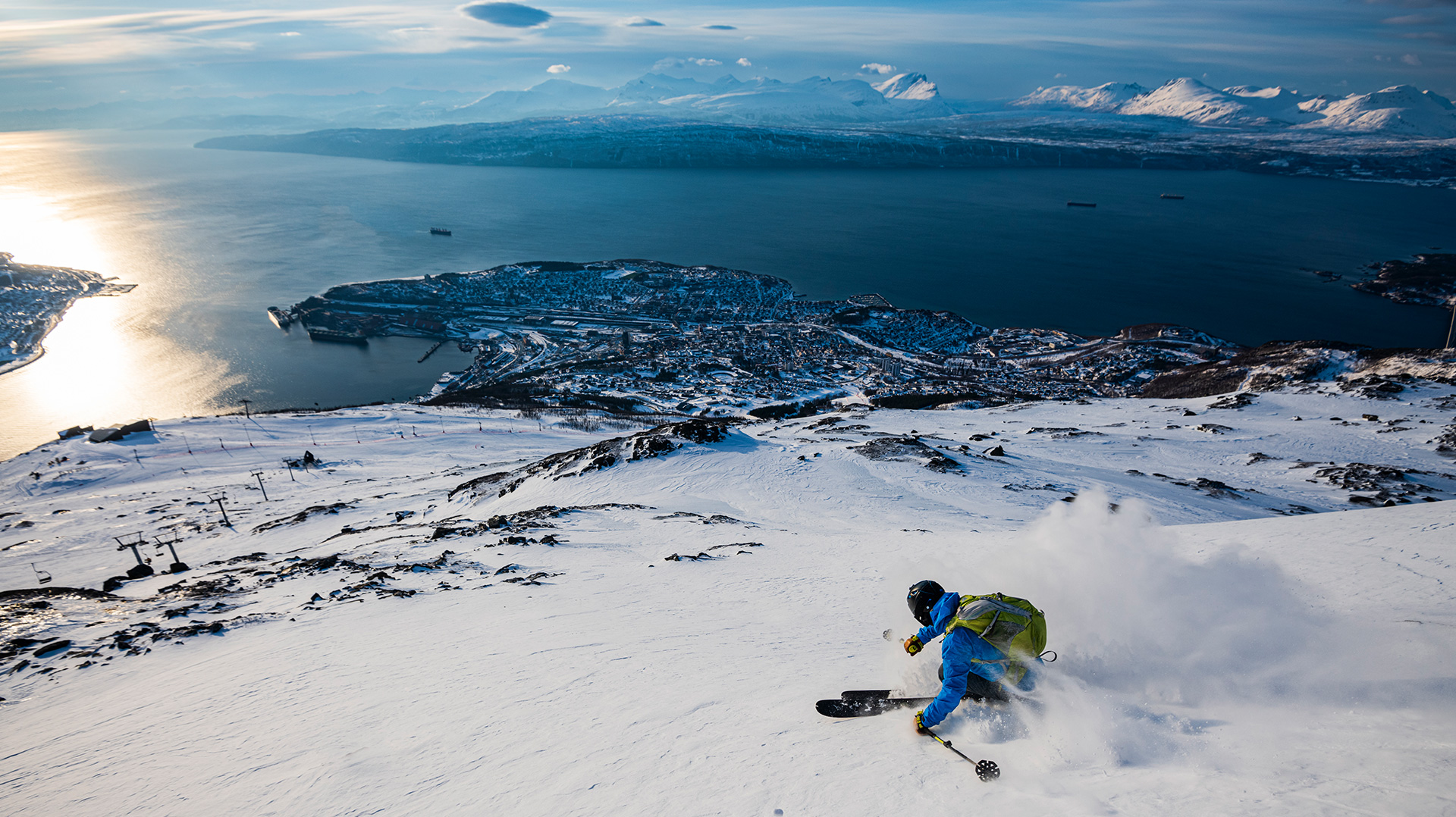 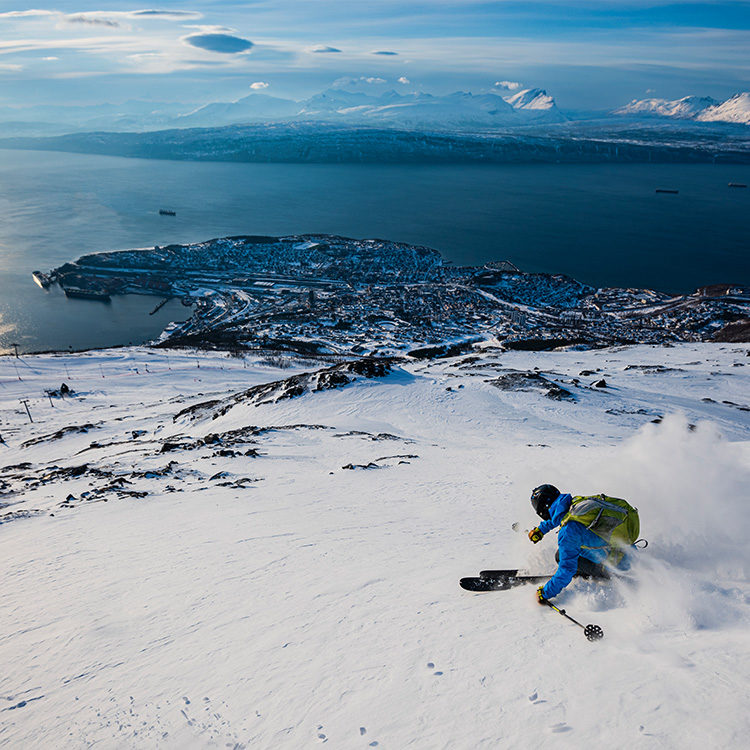 Skiing with a view at Narviksfjellet, above the Ofotfjord. This is an everyday activity for local Micke af Ekenstam, who literally lives at the bottom of the ski area.

Skiing with a view at Narviksfjellet, above the Ofotfjord. This is an everyday activity for local Micke af Ekenstam, who literally lives at the bottom of the ski area. 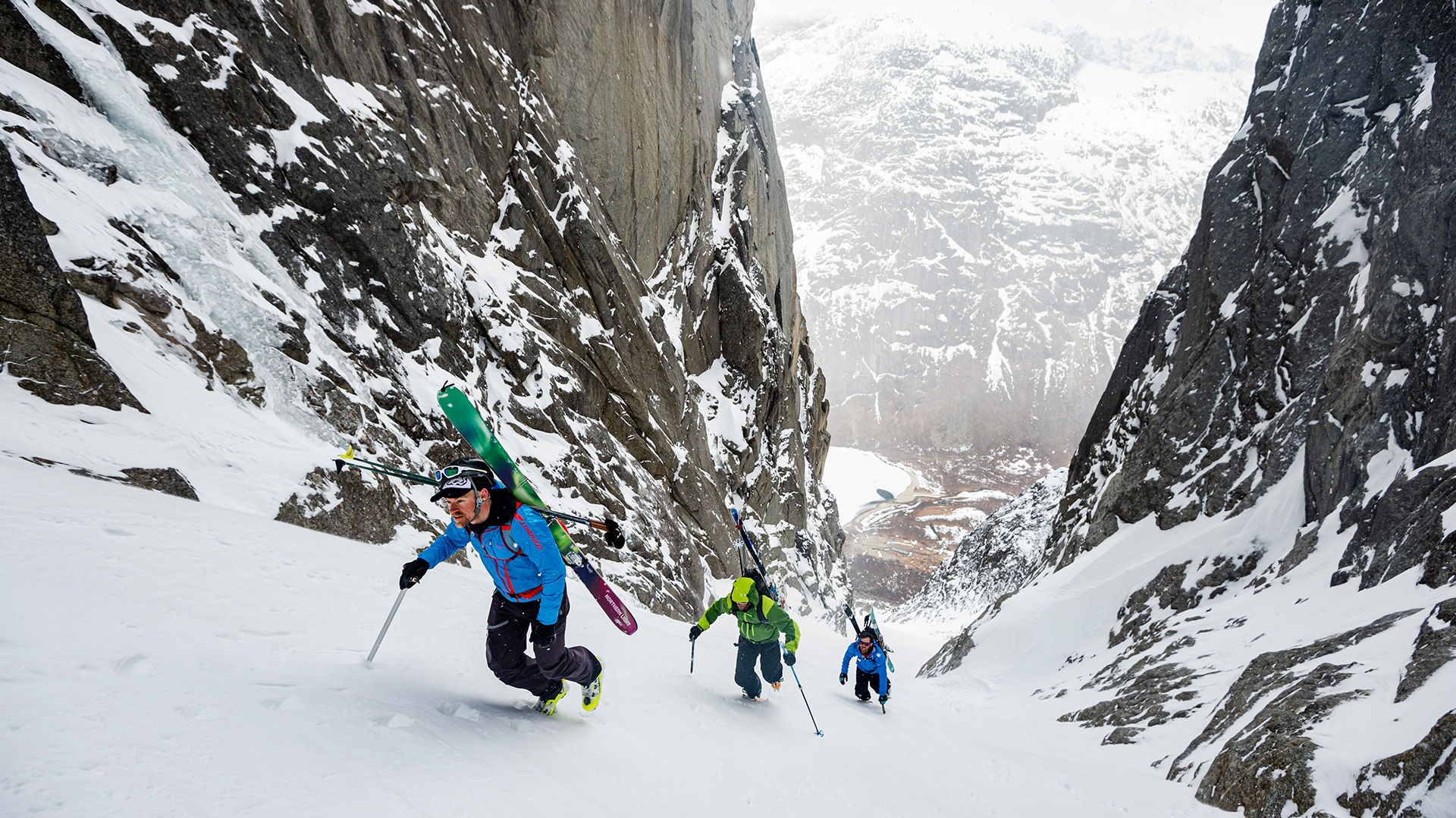 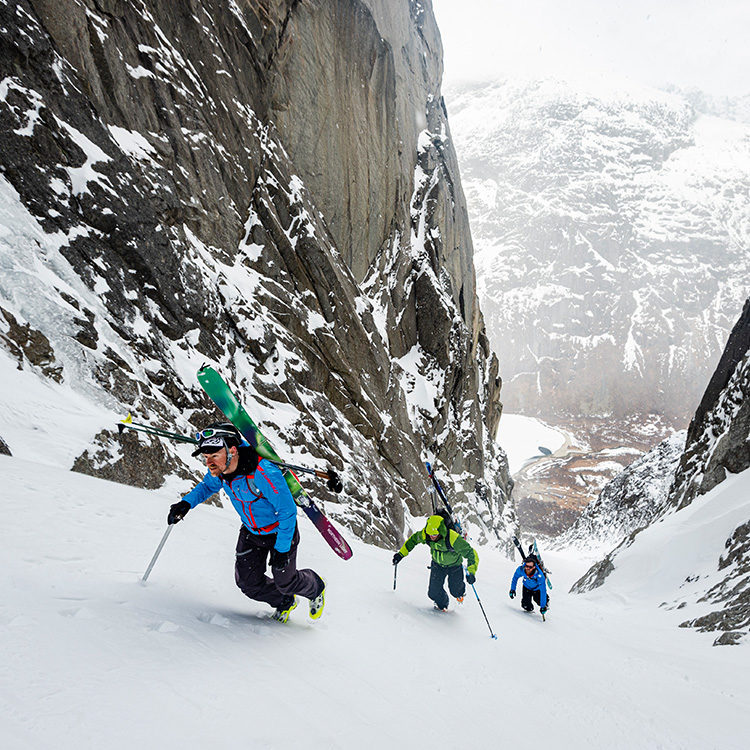 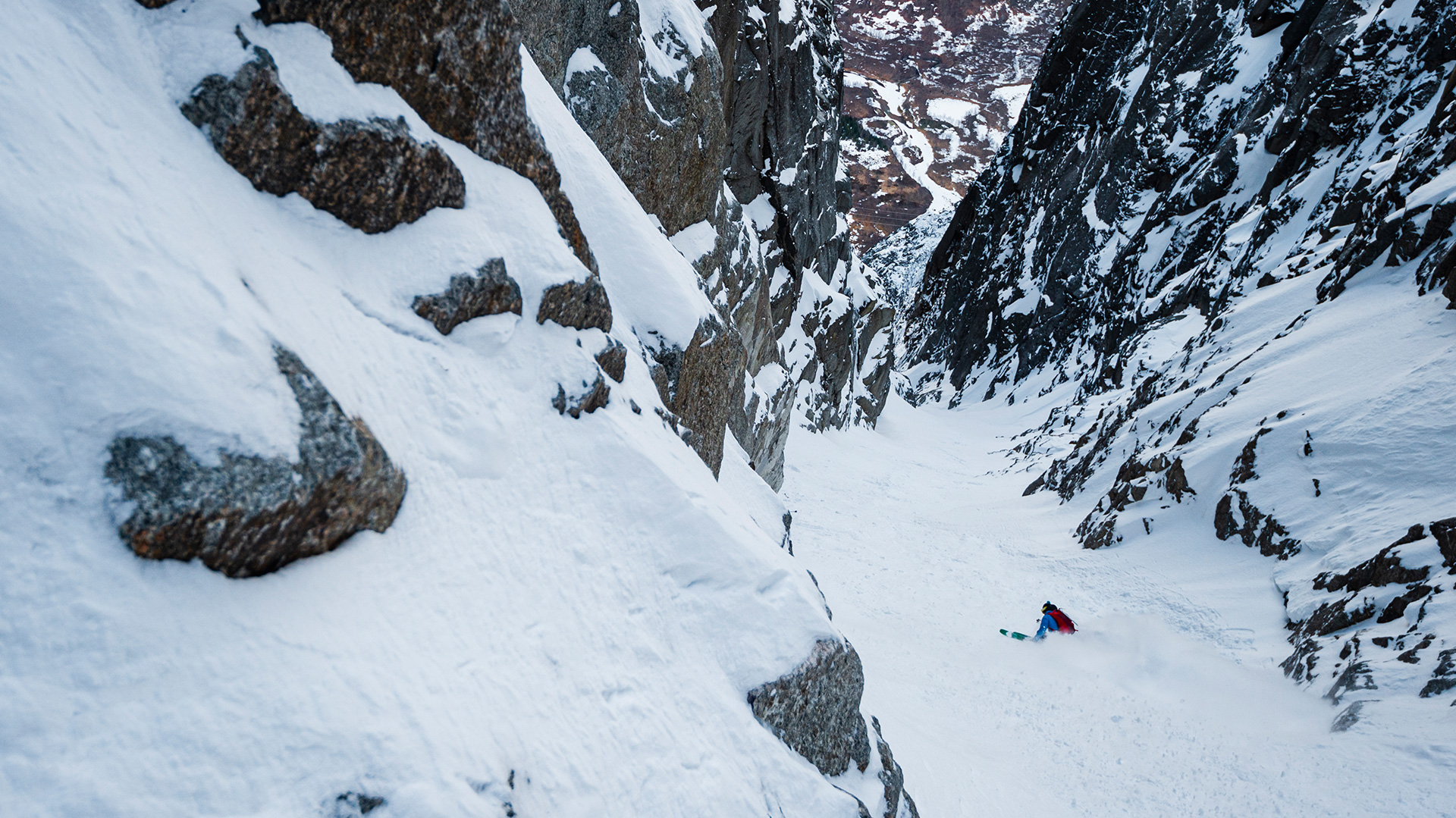 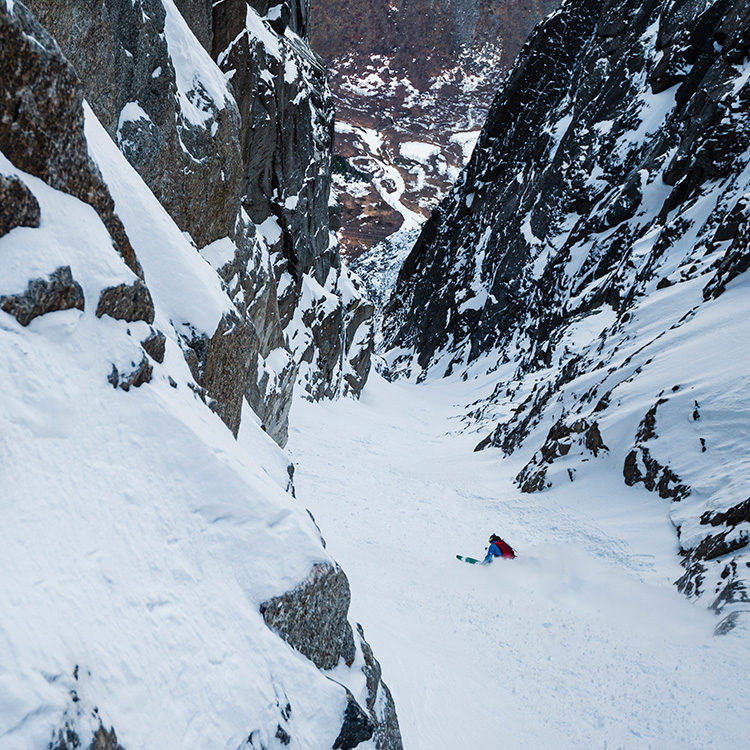 Skamdalsrenna, the other way. Micke gets the first tracks back down the aesthetic splitter near the village of Beisfjord.

Skamdalsrenna, the other way. Micke gets the first tracks back down the aesthetic splitter near the village of Beisfjord.

With a career as a sustainability professional, a guidebook author, and most recently, training to become a ski guide, Micke af Ekenstam has no problem filling his days. Despite his busy schedule, the 51-year-old skis at least 100 days every season and typically logs more than 100,000 vertical meters uphill.

“After my daughter was born 16 years ago, I struggled to balance time spent at work, with the family, and on skis,” recalls Ekenstam. “With less time available, it became difficult to continue skiing in the same fashion as before—but with lighter gear, the horizon expanded. I could do more in less time, often before or after a day at the office.”

“Ski touring is a good way to stay fit and get outdoors on days when I normally would get stuck on the sofa,” he added with a laugh.

Ekenstam grew up in the little mountain town of Hemavan in Swedish Lapland. The ski slopes were literally right in front of his house. Even though Micke lived nearly next door to Ingemar Stenmark, one of the most successful alpine ski racers of all time, he never got the racing bug. Instead, he got hooked on mogul skiing, and when his knees said no thanks, free skiing became his passion. 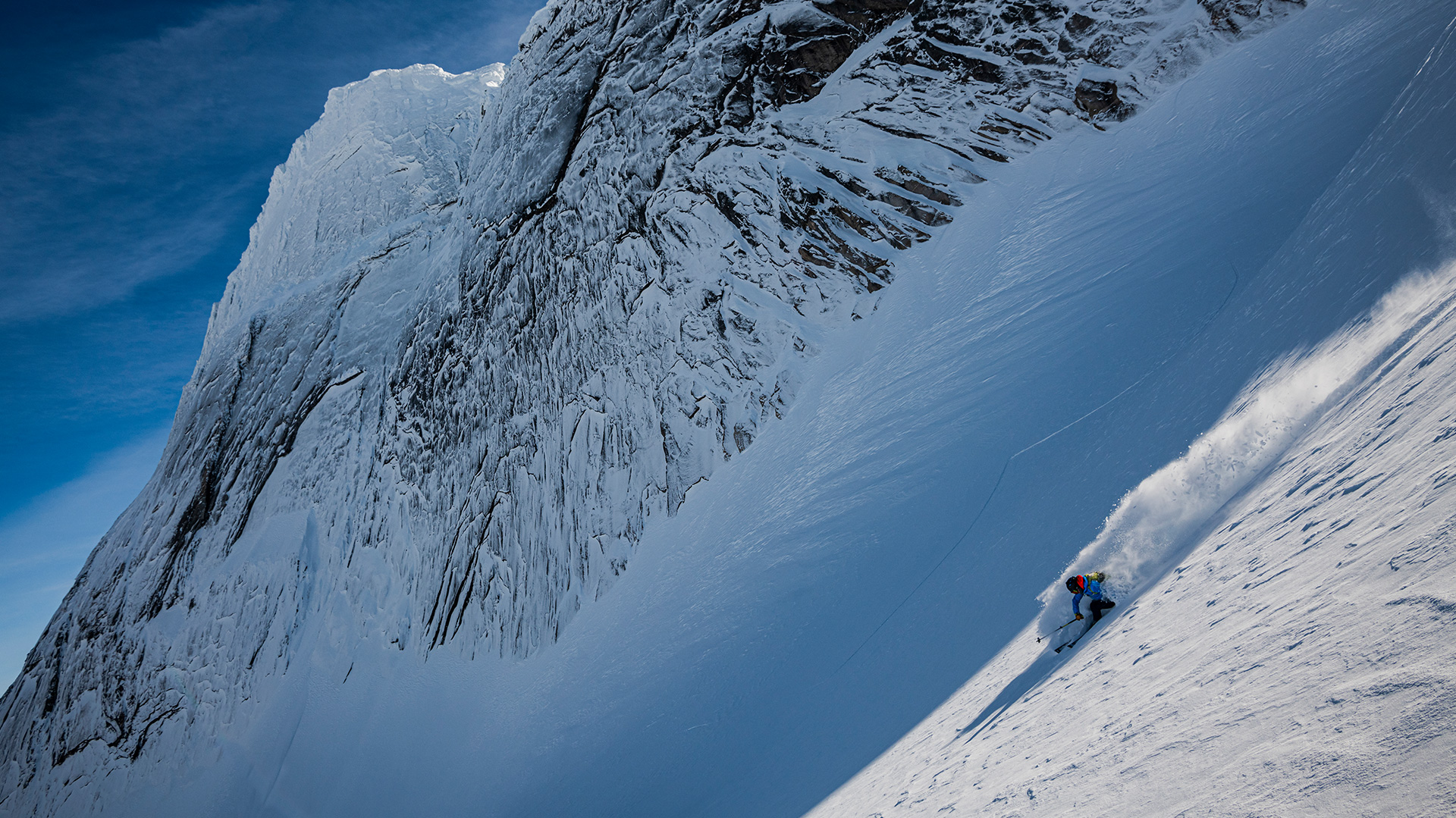 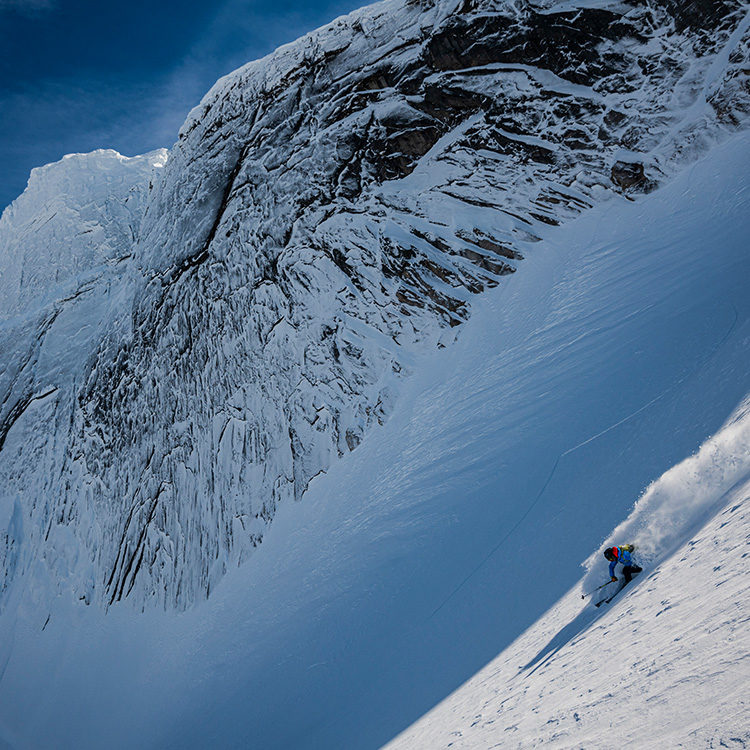 On narrow, ultra-light ski-mo skis, Ekenstam is a powerful and technical skier. Here by Presttinden, next to Norway’s national mountain Stetind.

On narrow, ultra-light ski-mo skis, Ekenstam is a powerful and technical skier. Here by Presttinden, next to Norway’s national mountain Stetind. 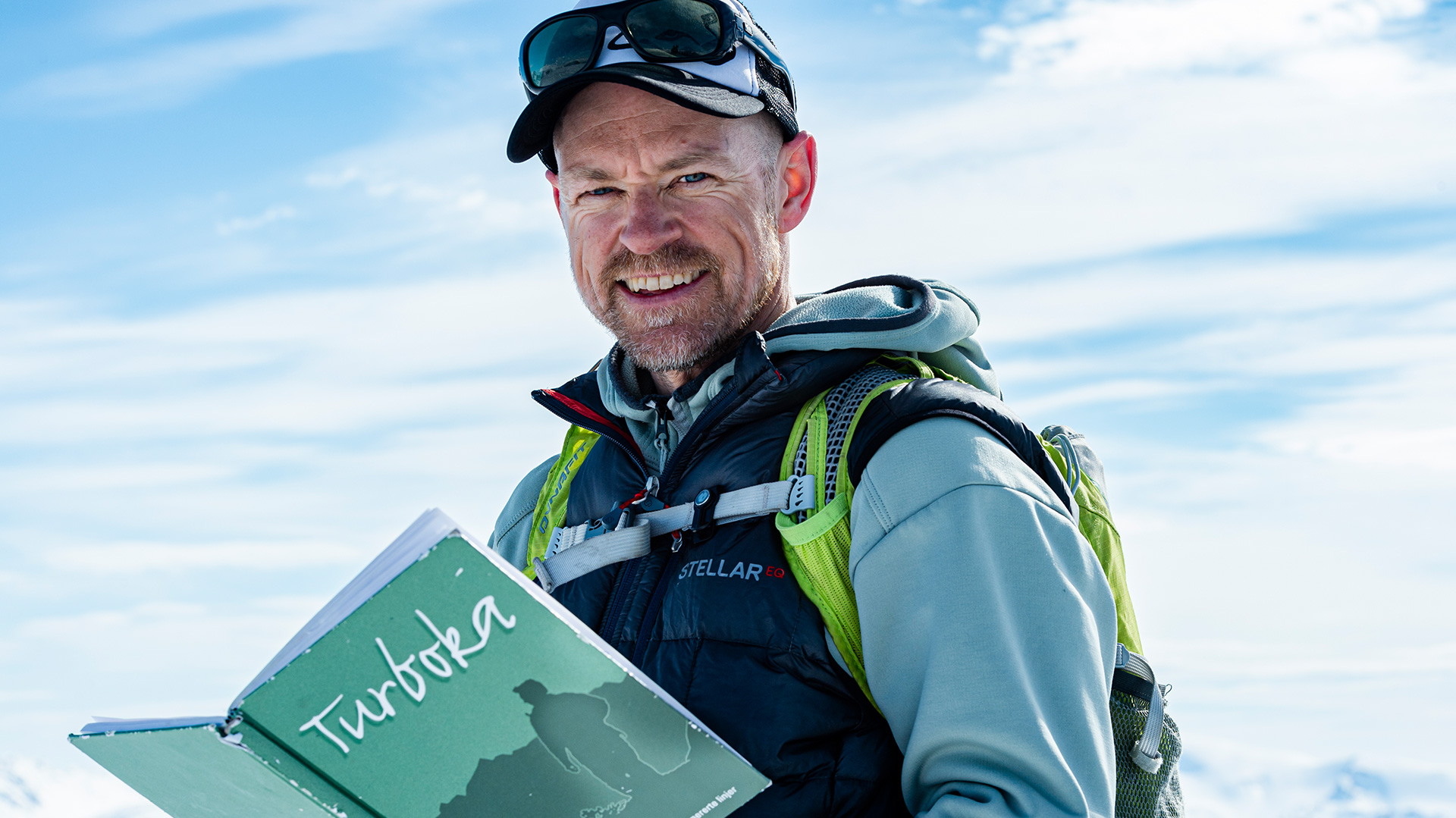 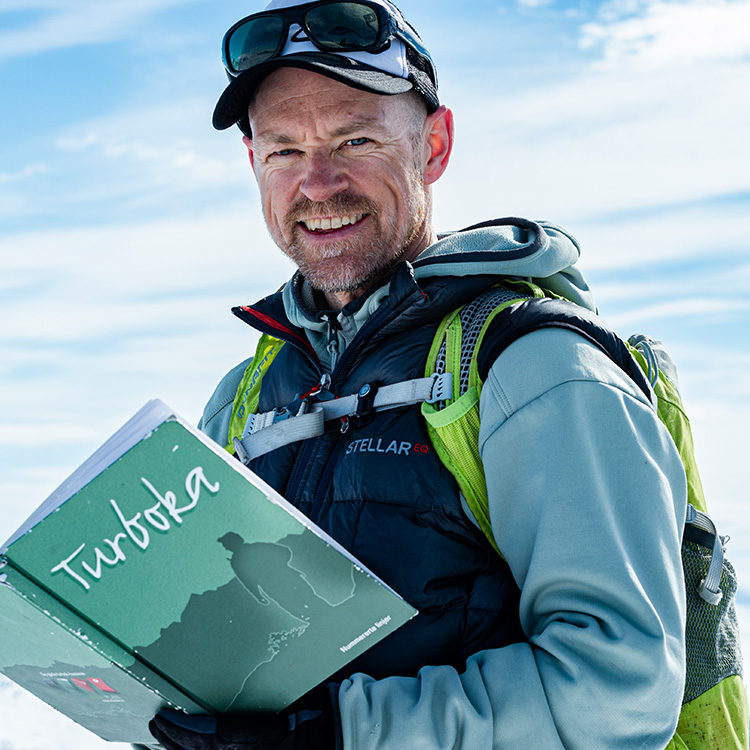 All mountains in Norway have a “Turboka” (peak book) for people to sign. On this day, Ekenstam signed in at Tredjetoppen, above the ski area in Narvik.

All mountains in Norway have a “Turboka” (peak book) for people to sign. On this day, Ekenstam signed in at Tredjetoppen, above the ski area in Narvik.

“When I was young, I lacked the talent to be competitive in the alpine or mogul scene but kept at it since I identified myself as a skier,” says Ekenstam. “My curiosity to try new things probably made me move into free skiing and, later, to competitive ski mountaineering.“

Between university studies, Micke spent several winters in the Alps; as his skiing progressed, opportunities came along. In the early 2000s, the Swedish film company Down Film (primarily known for the legendary Free Radicals series) asked to film together, and a few companies offered sponsorship deals. For a student on a budget, it was more than welcome support.

“I usually refer to myself as a former semi-professional skier since I made some money from sponsorship deals but nowhere near enough to finance my life as a student,” says Ekenstam. “I remember it being a pretty big deal for me to get a prize check of 5,000 Norwegian crowns ($500 USD) and a portable stereo when winning the Norwegian Free Skiing Championships in the late nineties.”

Sustainability and environmental topics have been part of Ekenstam’s DNA for a long time. While at university, he studied environmental science and eventually landed a job as the sustainability manager for one of Norway’s biggest tech consulting firms. After ten years in that role, he moved on to a new gig in sustainability for a company called Smart Innovation Norway. 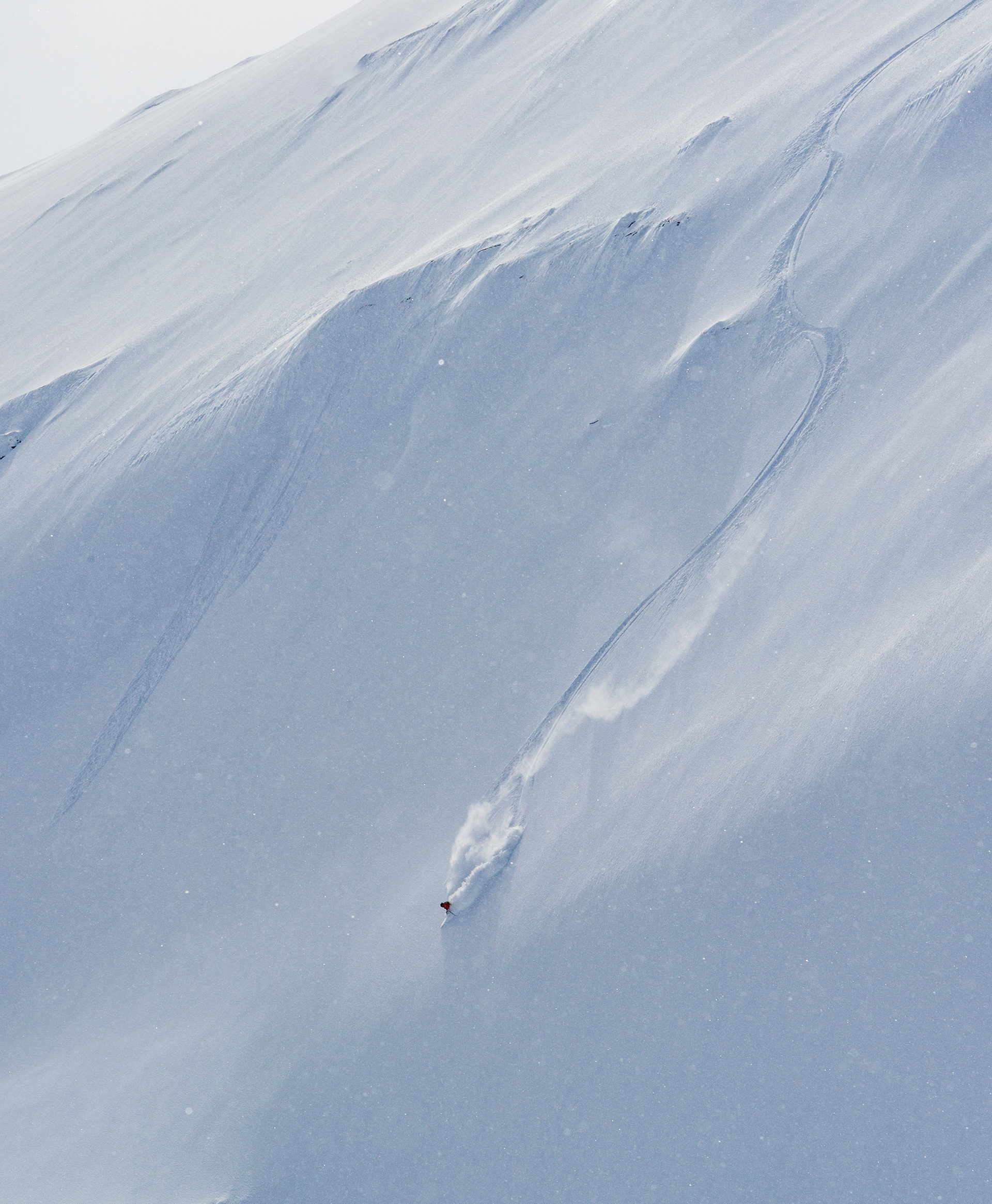 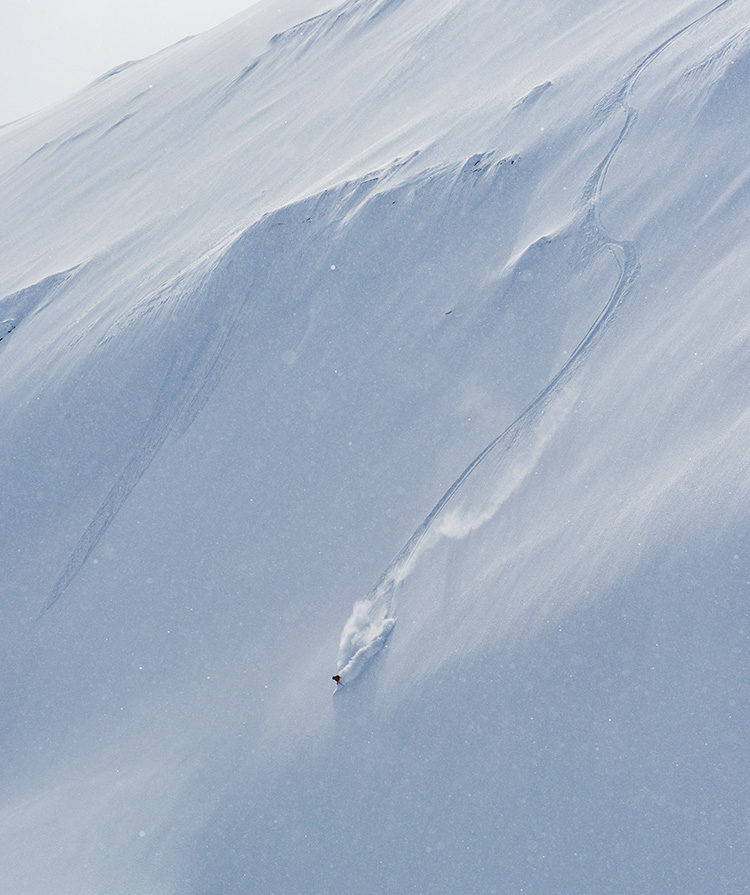 Exceptional powder skiing conditions near Låktatjåkko Mountain Lodge, Sweden’s highest-located hut. The waffles after this run were as delicious as the powder.

Exceptional powder skiing conditions near Låktatjåkko Mountain Lodge, Sweden’s highest-located hut. The waffles after this run were as delicious as the powder. 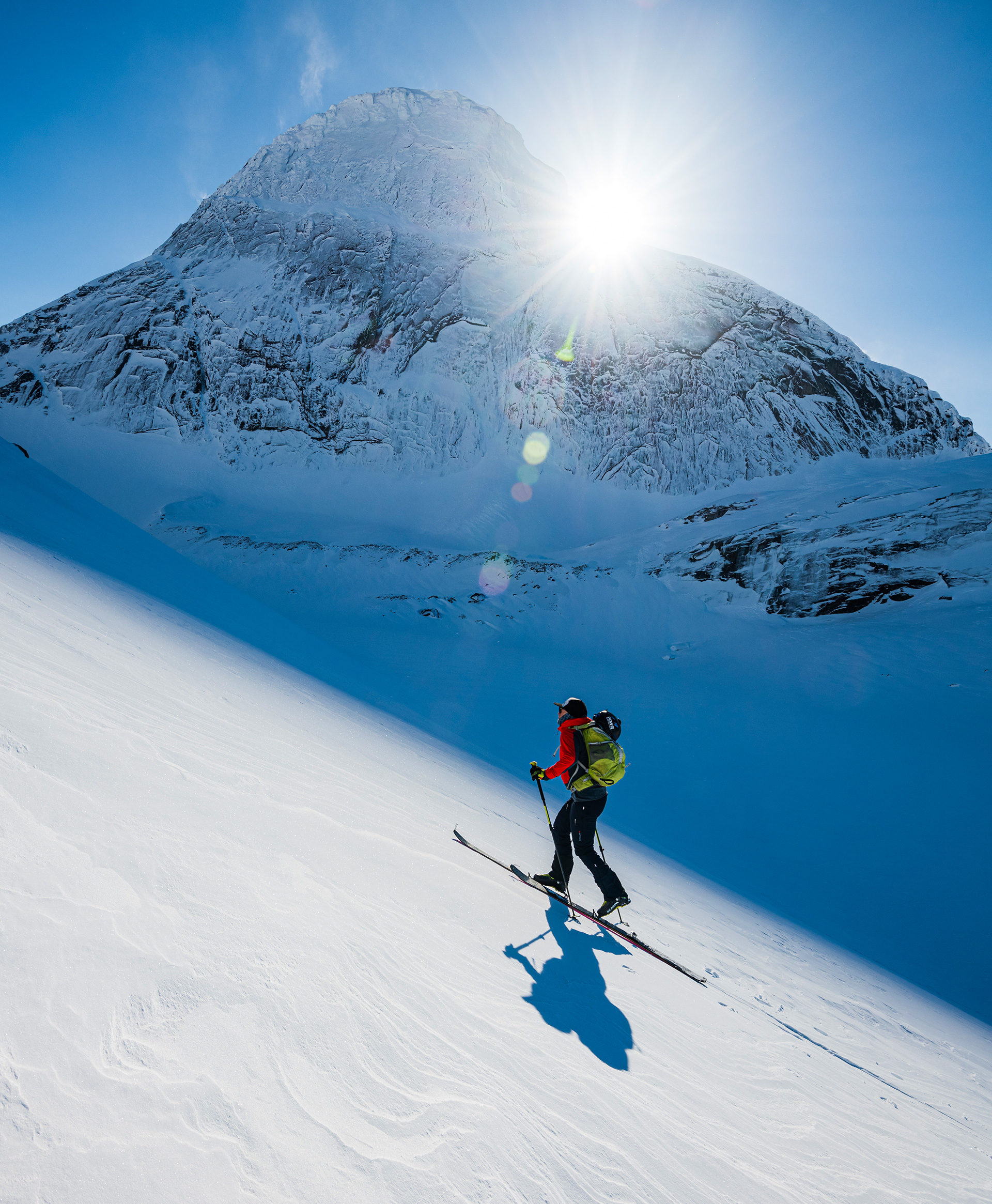 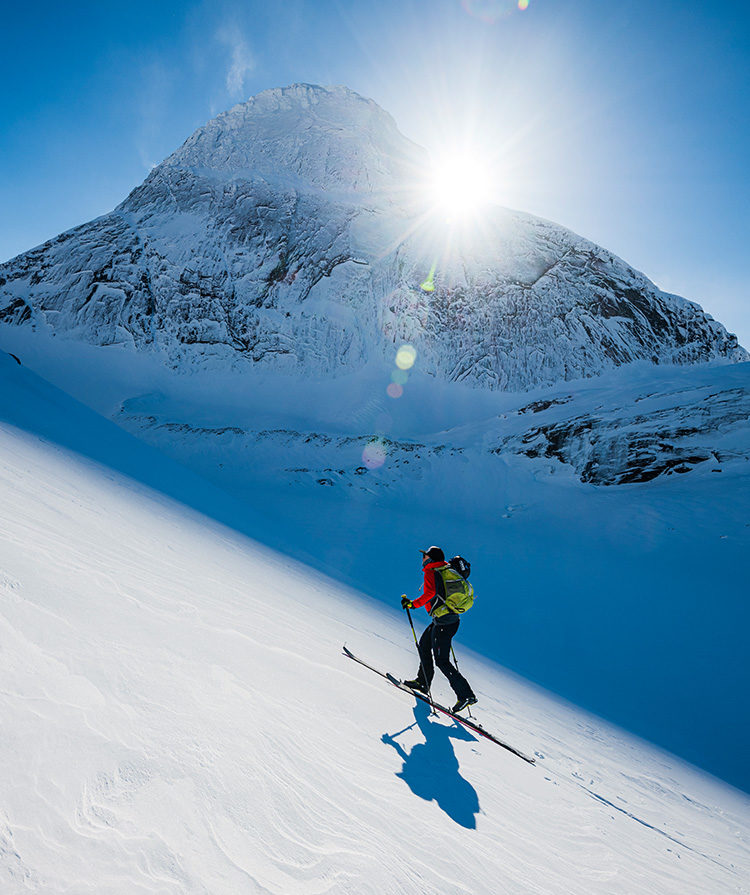 “I’m based in Narvik, 300 kilometres north of the Arctic circle, but almost daily, I am in digital meetings with people from all over Europe,” explains Ekenstam. “We are involved in big EU projects, and it’s inspiring to be able to sit here and exchange ideas and knowledge with people on the opposite side of Europe.”

One of the projects is Narvik’s quest to host the alpine skiing World Championships. Unexpectedly, the small mountain town in the north became Norway’s candidate for the 2027 application, but Crans Montana in Switzerland received the jury’s vote. Now, Narvik is applying for the event in 2029 and Ekenstam is involved in the organization again.

“When we applied for the 2027 championships, we decided to become the most sustainable winter sports event globally,” he says. “This vision remains, and my job is to fulfill this mandate; how do we manage this in real life?”

All local and regional transportation will operate with zero emissions. Instead of establishing new infrastructure – for example, new hotels that might not have enough business afterwards – the organization intends to rent a cruise ship that will function as a hotel but will run on electricity instead of diesel in the harbour. 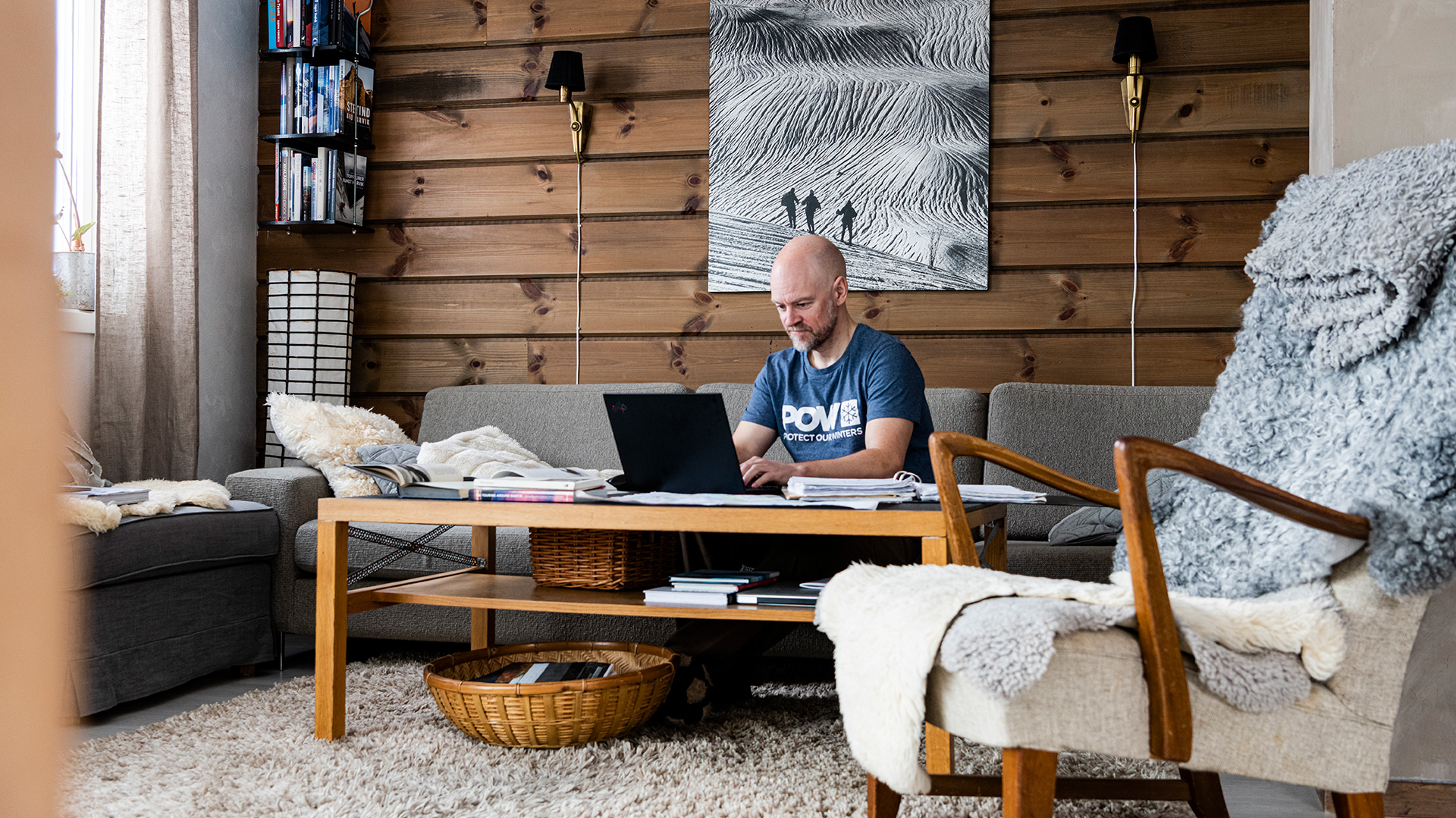 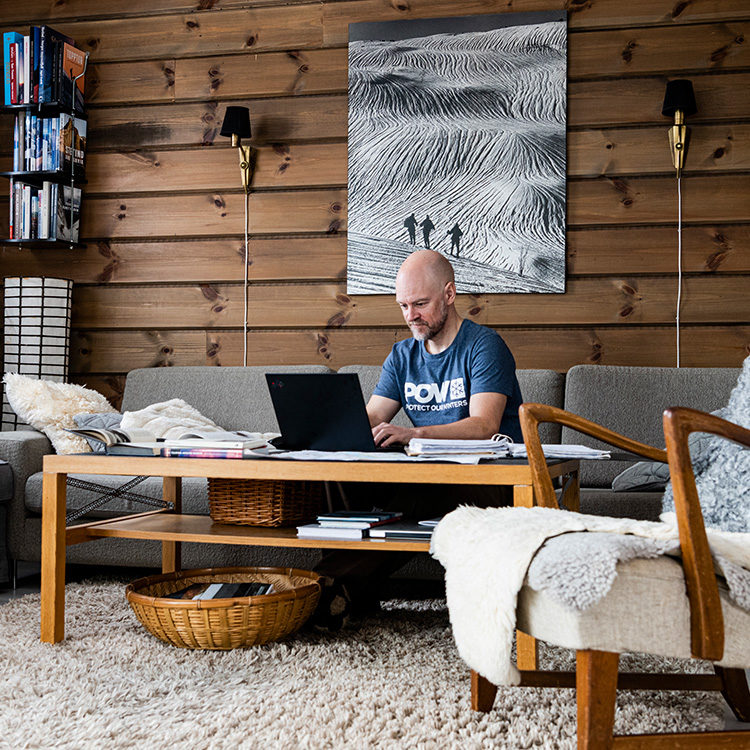 As a guidebook author, Micke af Ekenstam has written four books on ski touring and climbing in the Narvik region and surroundings.

As a guidebook author, Micke af Ekenstam has written four books on ski touring and climbing in the Narvik region and surroundings. 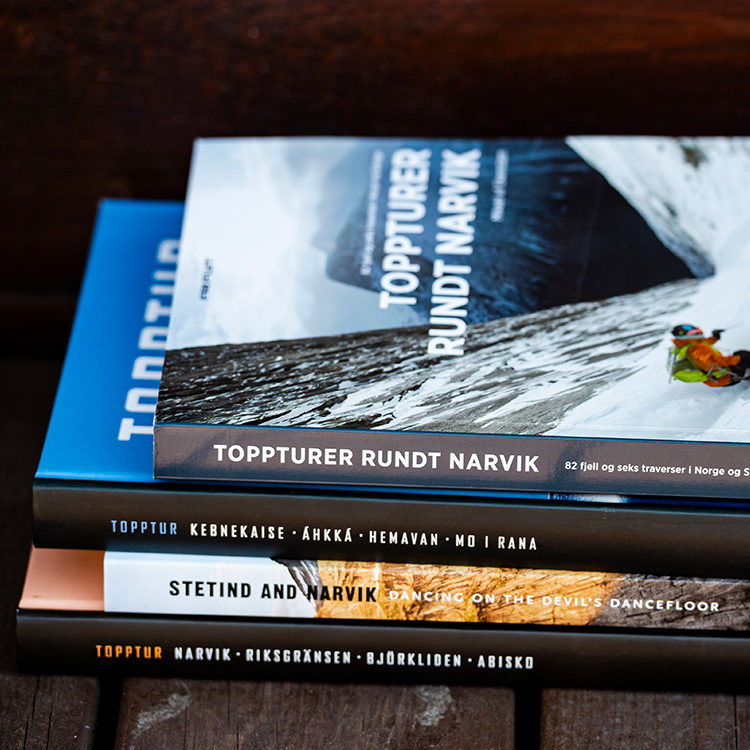 Ekenstam’s books are the best source of information for ski touring around Narvik.

Ekenstam’s books are the best source of information for ski touring around Narvik.

“As we are in the Arctic, where the rise in temperatures and the change in annual precipitation is happening three times as fast, we want to show how these issues can be addressed,” says Ekenstam. “We hope to use the event to highlight important topics that need to be on everybody’s mind.”

Most recently, Ekenstam began his education to become a certified ski guide in Norway. Even though he is a very experienced backcountry skier, formal education takes a few years.

“My goal is to combine my sustainability world with my ski world,” says Ekenstam, an ambassador for Protect Our Winters and former vice president for the organization’s branch in Sweden. “In the future, I want to bring people on extraordinary ski adventures where insights on what’s going on with climate change—and what we can do to slow the effects down—are part of the experience.”

Mattias Fredriksson is a photographer, journalist, and editor-in-chief for Interstellar. For almost 30 years, Fredriksson has documented ski and mountain bike cultures globally. He is a veteran adventure photographer with over 500 cover shots to his name and impressive longevity in the outdoor space. Fredriksson continues to contribute to many publications and photographs global campaigns for commercial clients. He lives in Terrace, British Columbia.
www.mattiasfredriksson.com @mattiasfredrikssonphotography